NEW BLASTER! - The Demolisher 2-in-1 from NERF N-Strike Elite

They just keep coming, warriors! This time the main N-Strike Elite line from NERF is adding another assault blaster to the mix. Meet the NERF N-Strike Elite Demolisher 2-in-1 blaster. This combines the good details of a lot of other blasters and then also adds the underslung grenade launcher! The folks over at Popular Mechanics did a great write-up on this one. This isn't the first NERF exclusive they've had, probably because they are great writers and just as much geek as the fans are! We just got official confirmation from our sources at NERF. This blaster is a go!

Now, PopMech does make sure to note that some tweaks are still happening with this blaster. The release is said to be slated for this Fall (2014). $40 for the price tag puts it in direct competition with the Rapidstrike from last year. Though we are talking semi-auto versus full auto. As pointed out by some fans, this is like a really good Stryfe update.

(Ages 8 years & up/Approx. Retail Price: $39.99/Available: Fall 14)
Take NERF shots to the next level with the 2-IN-1 blaster that dominates both MEGA and ELITE missions! The DEMOLISHER 2-IN-1 blaster is impressive in size and power firing up to 100 feet, featuring semi-motorized blasting, a 10 dart banana clip, and all new missiles.  Connect NERF scopes and lights to the blaster’s top Tactical Rail System and set sights on some of coolest NERF shots performed. Blaster includes two missiles and 10 N-STRIKE ELITE darts.  Four AA batteries required, not included. Available at most major retailers nationwide and HasbroToyShop.com."

Anyway, on to the details of this new beast! Just eyeballing it, you can see a lot of interesting stuff. Let's start with the two things thats many fans will be geeking out about the most; the banana clip (magazine) and the grenade launcher. So the magazine can hold up to 10 Elite rounds. Why not 12? Probably because the curved design will leave less room. Now we'll need to ask if there is any other purpose for the magazine beside the looks. Still, it seems like you'll be able to put up to a full drum into the Demolisher, unless that will get in the way of accessing the grenade launcher. 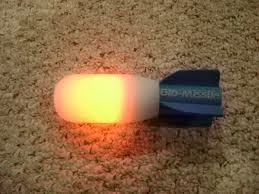 The grenade launcher will obviously have a little more function. At least, I hope the grenade/rocket that is pictured will be in the final product. It reminds me of a Buzz Bee Glo Missile. The Popular Mechanics folks call the ammunition in the launcher a "fat MEGA dart". I'm hoping that they just got the terminology wrong. I can't tell if you prime it by pumping the black handle once or if there is a small air tank that you pump into a few times. Apparently the launcher is fired by pumping the underslung pump. I looking different at first glance: You can see the trigger on top of the launcher, just in front of a tac rail. I'm hoping that there is a trigger on the other side too. I usually fire with my right. So I would want to fire the launcher with my left.

Due to the design of the launcher, I would assume that it is integrated into the Demolisher and that it is not a simple tac rail mount. Sadly, that would mean that you can't take this and mount it on another favorite blaster. Here's hoping I'm wrong! Otherwise, you also have at least two other tactical rails to utilize on the Demolisher. It might be three if they put a matching tac rail on the left side of the blaster. 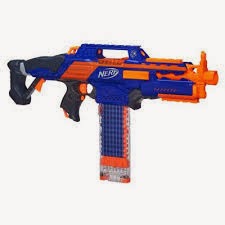 Looks like this will be another flywheel blaster. You can see the familiar flywheel activator under the main trigger assembly. The Rapidstrike was the assault blaster release of 2013. It's dart output was rather impressive, but there were some jamming and accuracy issues noted by a significant number of fans. Maybe the Demolisher will beat it out as the flagship for the N-Strike Elite line this year.

There is a strap point under the handle. I don't see another one, so we'll have to see how that works out. In a picture on Popular mechanics, a writer is holding the blaster. It doesn't seem too big, so perhaps the one strap point will be comfortable enough to use with a bandolier.

The stock is interesting too. It seems to a Stockade stock, adapted to hold extra grenades instead of Elite darts.

It looks like the Demolisher can accept barrel attachments, so you can complete the tacticool look for yourself. Just like on the Rapidstrike, I'm assuming people will want to attach a "silencer" from a Spectre blaster to this assault blaster. Does that mean Walmart will come out with an OJ-colored Spectre pretty soon? Likely!

A big thanks goes out to the Adult Fans of NERF. Glad Mr. K seems to be an insomniac :) It also looks like propweaponscoop.com and Basic Nerf saw it early too. What do you think, warriors? Is it your dream come true? Too COD for you? Will it beat out the Rapidstrike? We'll see! ~Chris
Posted by Click Click BAMF at 6:31 AM