Demolisher and Others Available Online

Check out Amazon.com, warriors. It holds all of the blasters we just saw at the Nerf All Access event last night! You need to see #nerfallaccess on social media for other little tidbits. Don't worry, we're working on more video too! 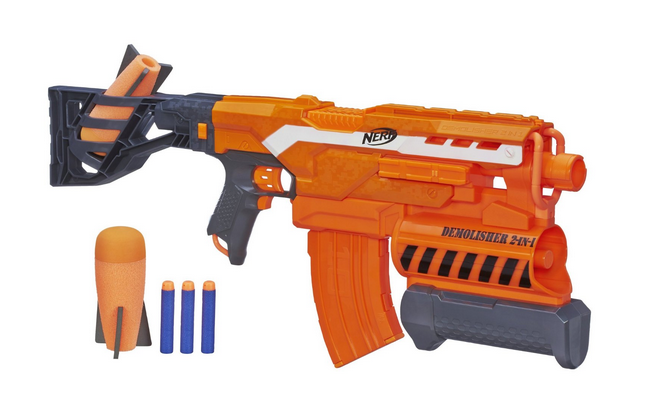 The Nerf Elite 2-in-1 Demolisher is listed at it's MSRP of $39.99. It comes with 10 Elite darts for the banana clip and two missiles -one for the chamber and one for the storage.

The missile launcher definitely brings the intimidation factor back like the Titan used to show off. If you want an updated Stryfe with the added joy of a launcher, this is your new main. 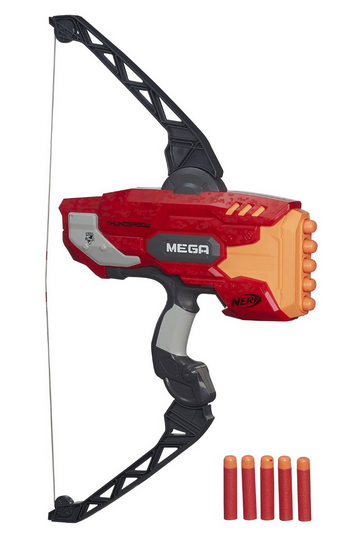 The Nerf MEGA Thunderbow is listed at $39.99 too. To be clear, when Amazon says the blaster fires 5 darts at a time, they mean in a row -not at once.

I really look forward to getting the Thunderbow. Along with the bow from the Rebelle line, I think it this will be the first time NERF has given us a completely new option. The Zing bows really do get some competition with this one. 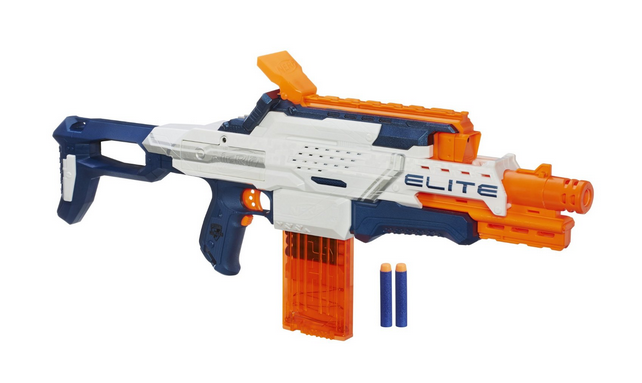 The NERF Cam ECS 12 also showed up on Amazon. It lists as The Nerf Pro-Cam. The folks at NERF HQ told us that this will remain as an online-only blaster for now, so don't bother waiting for it to show up in stores.

The price-point is still really high on this one. You're looking at dropping $70 on it. The performance was really good at the All Access event. 70 bucks good? I'm still not sure.

The Slingfire was also listed on Amazon, but it went back to "currently unavailable" at the moment. The Slingfire is back up on Amazon too! This one seems like a lot of fun. Using it, you get a great feel like you are in a cross between the wild west and post apocalyptica. And have you seen the trick shots that Vas the Stampede and F2A was pulling off? The NERF Attacknid was at the event too, but was still a prototype. For now I still have my eyes set on the Stealth Stryder from Combat Creatures. A designer with the NERF Attacknid told me that they worked to simplify the NERF version. It won't have all the bells and whistles, but should function well for everybody.

Any specific one of these you're going after? ~Chris
Posted by Click Click BAMF at 12:07 PM No comments:

Warriors! I had to keep it "hush-hush" until the day of, but we have plenty of video and pics from the NERF All Access party that just happened tonight in New York.

NERF was awesome enough to invite a select group of bloggers out for yet another kickoff of some of their flagship blasters for the season.

Among the other products was the MEGA Thunderbow. Honestly, I had somewhat forgotten about it because it feels like forever since it was announced. Well, I certainly won't forget it now!

Not only am I impressed by all of the physical qualities, this blaster also has the potential to completely kick ass and take names. Just look at what we did with a few seconds of fooling around.

What trick shots are you hoping to try?

More NERF info coming out of the event soon! And don't forget the facebook contest we announced. (Hint: Look at the blog about the Google Hangout for the information!)
Posted by Click Click BAMF at 10:38 PM No comments: 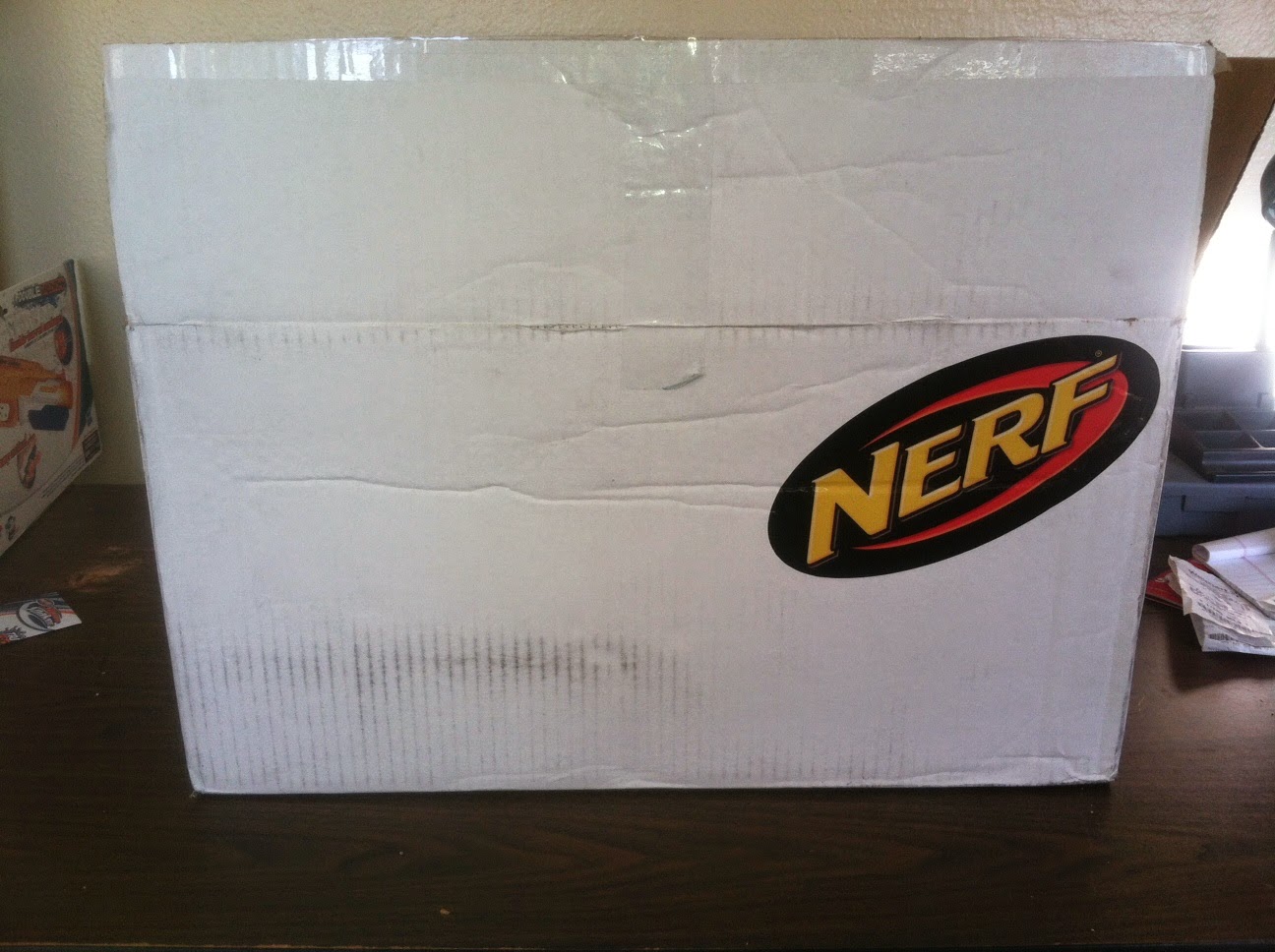 Warriors. We were lucky enough to get a new box from NERF this week. Check out some of the swag! Nerf threw a limited print T-shirt our way. Really just going to spam these up. with a little commentary.

The letter we got, signed by a Hasbro VP, tells us that this is a limited print T-shirt that won't be in stores. I'll wear this proudly! 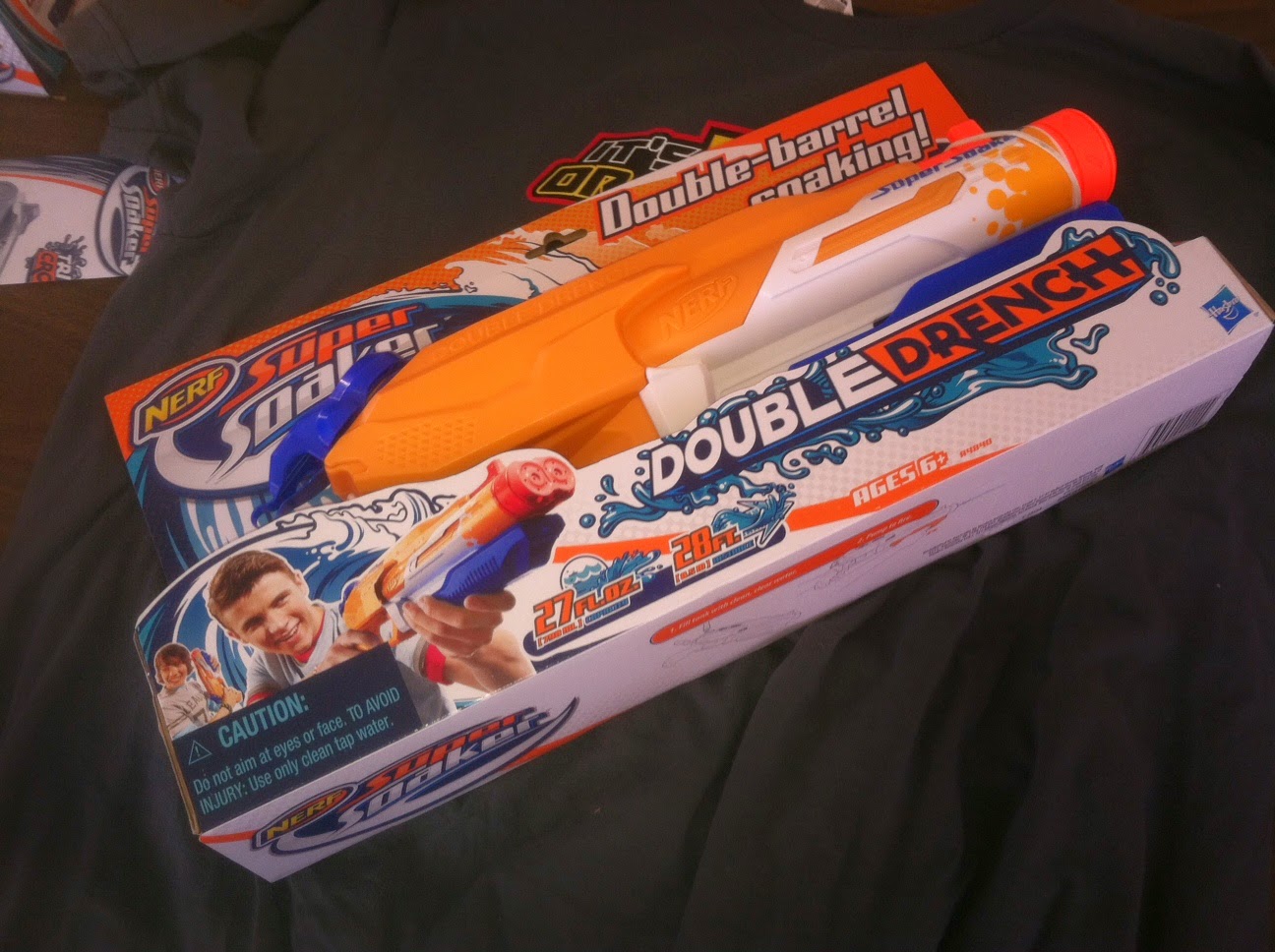 They made sure to include another Super Soaker Double Drench after I told them we were getting a kick out of the first one they sent. 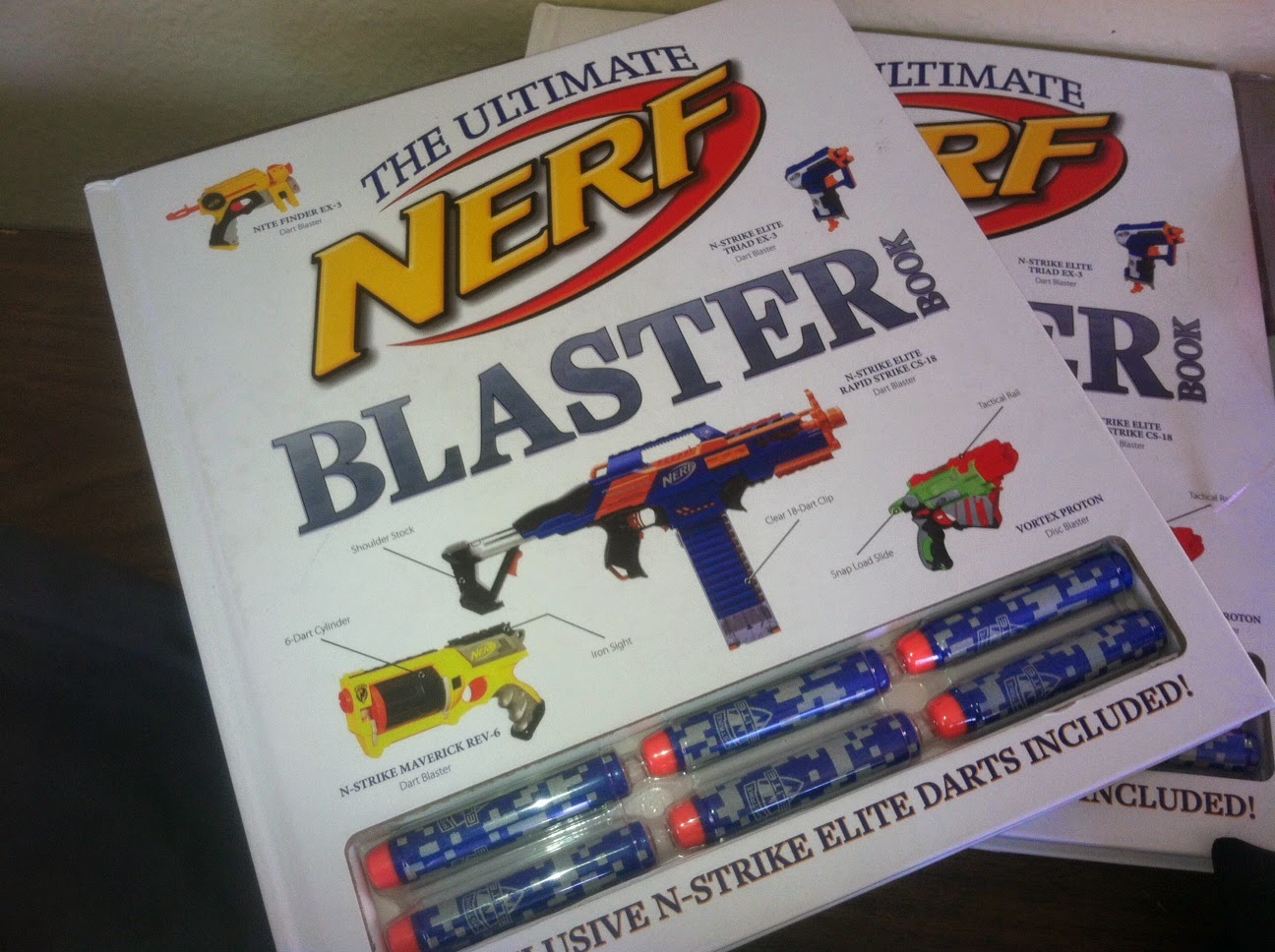 You see we got a second Ultimate NERF blaster book. Methinks there will be a book giveaway soon at Click Click BAMF! 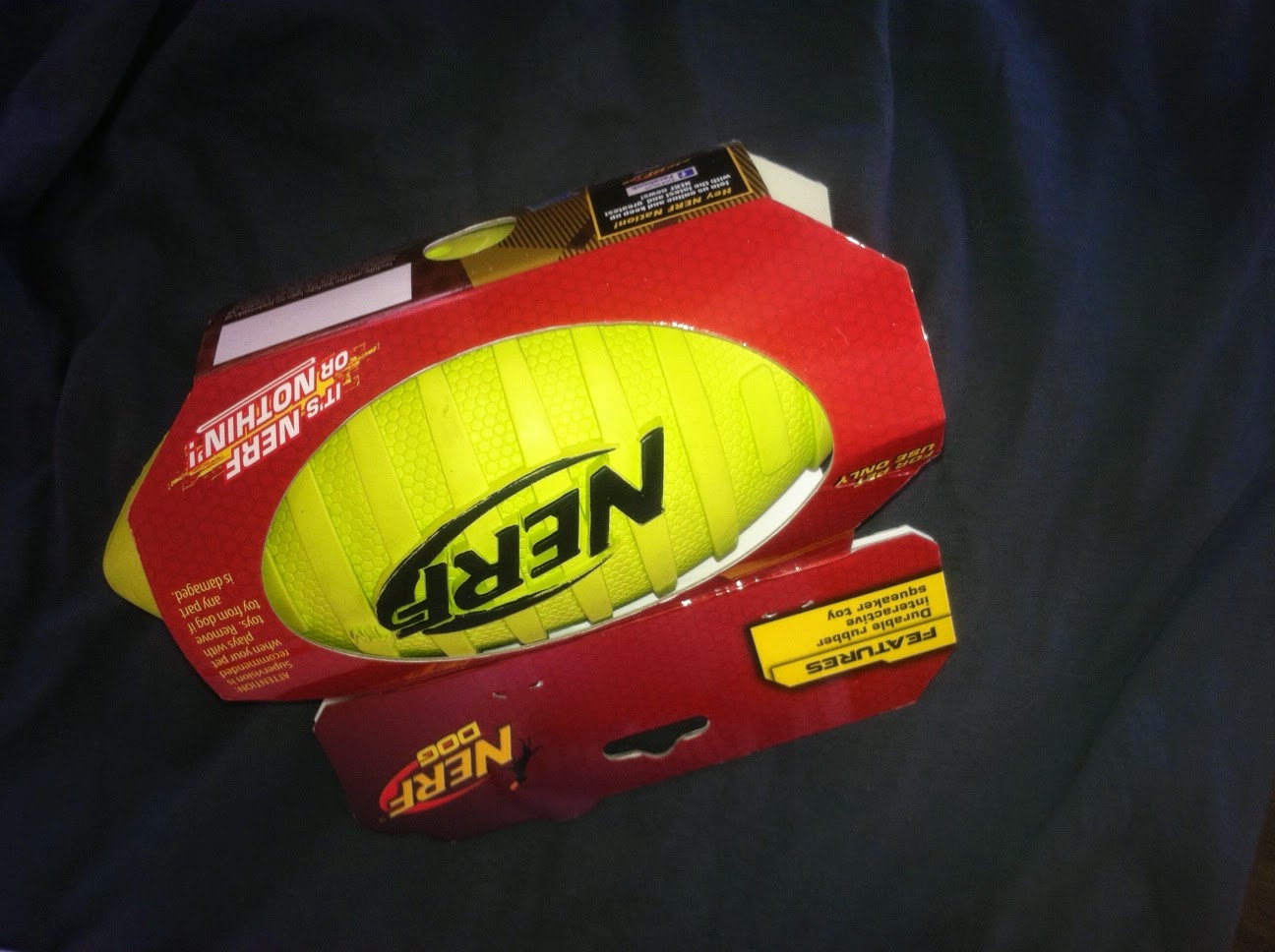 Nerf dog football. I scared the heck out of my cats and myself when I discovered this was a squeaky toy at  in the morning! 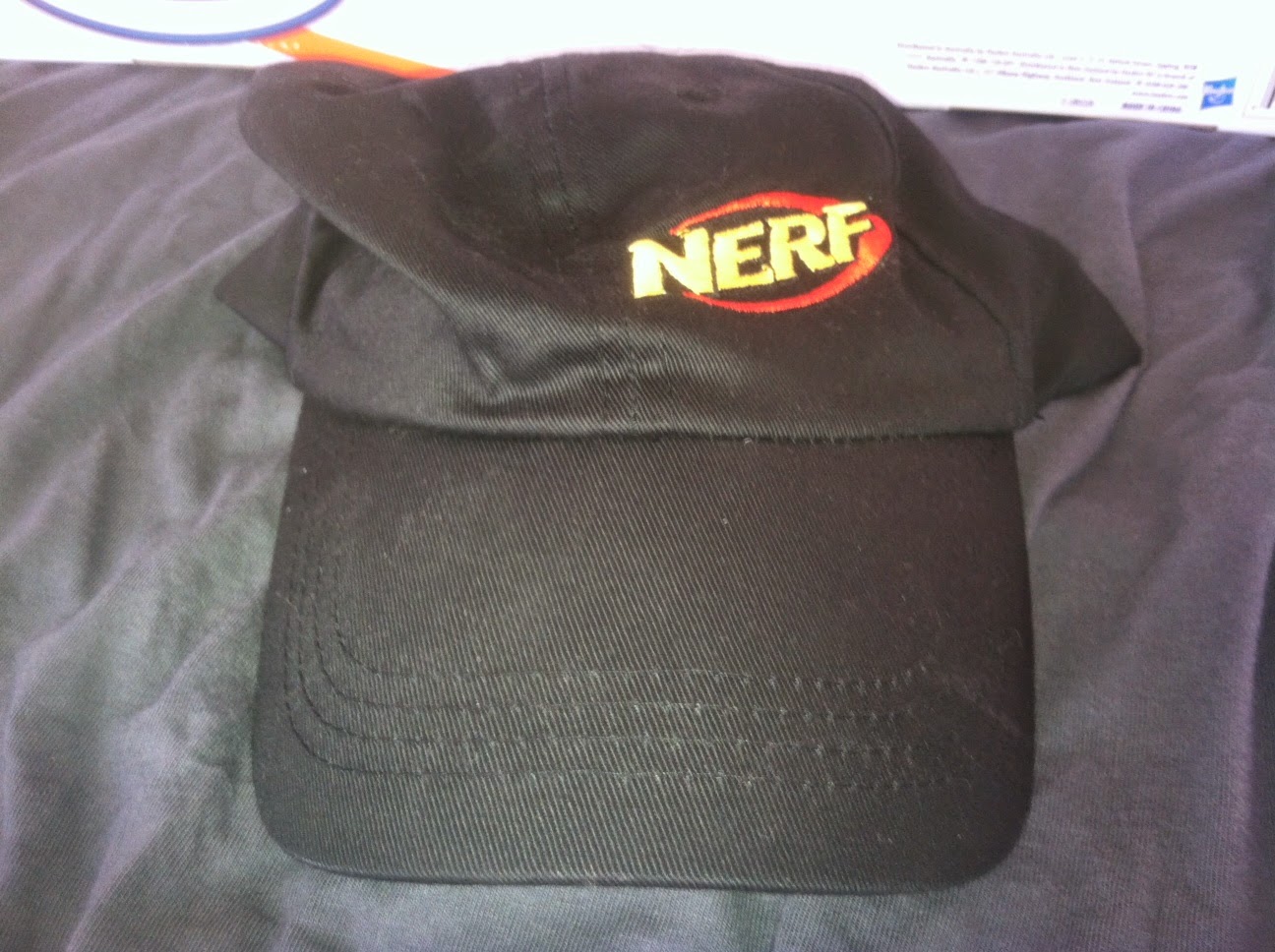 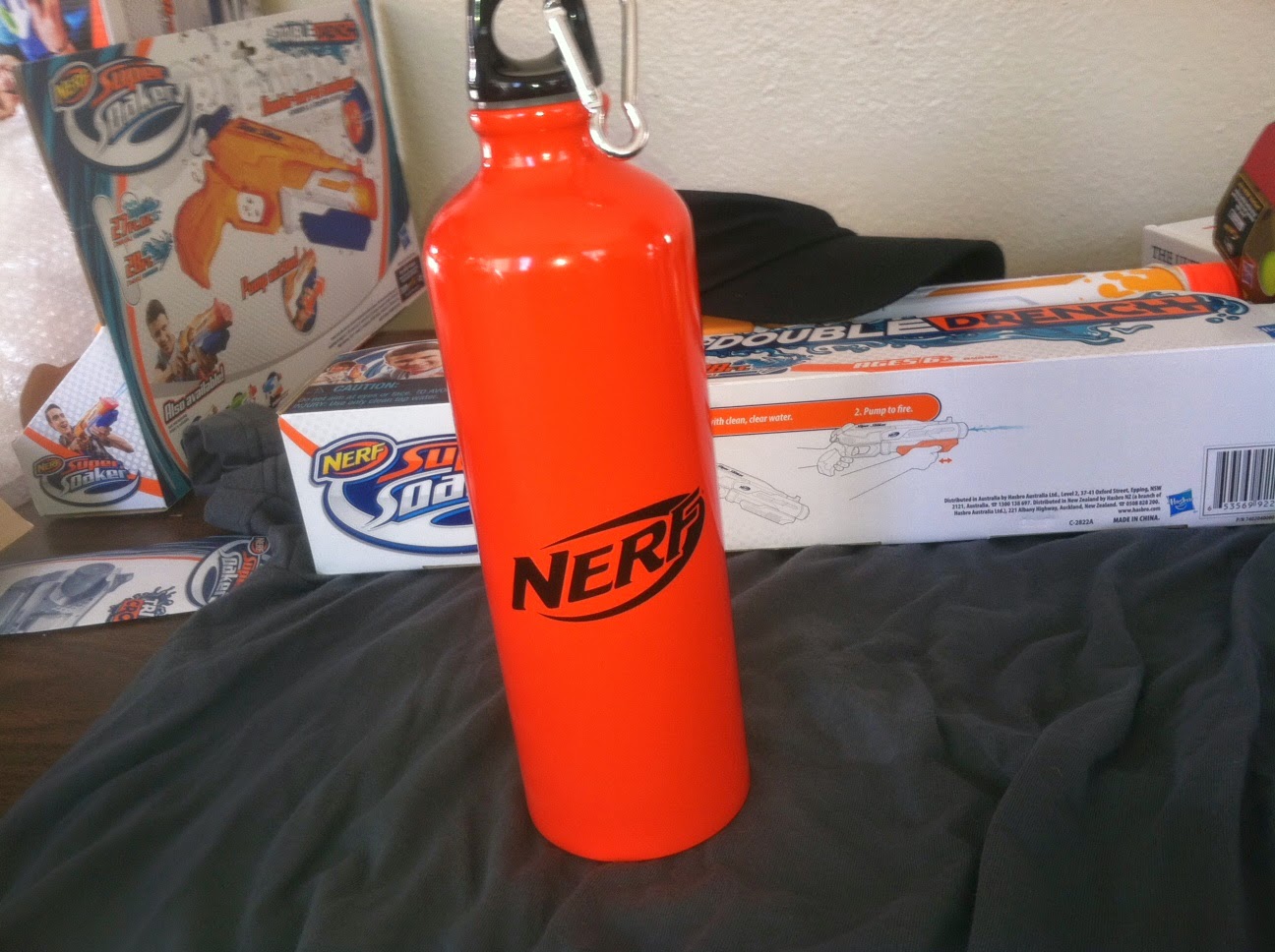 NERF water bottle. Gots to stay hydrated with all that warring. Seriously, make sure you drink enough water in the hot weather guys. Even in a water fight, you're getting dehydrated. 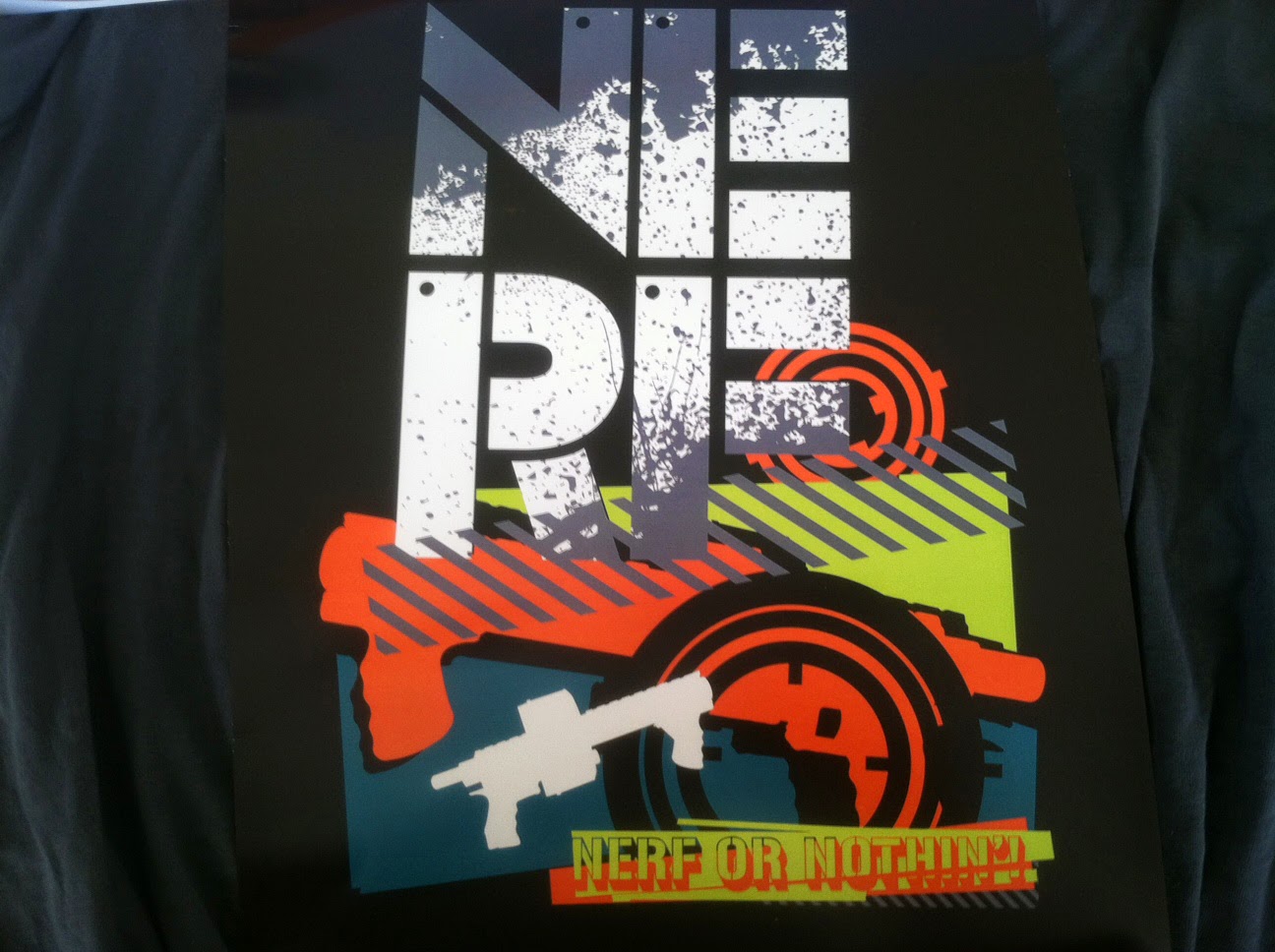 This NERF poster is cool. It makes me think of a lot of 80's and 90's designs I grew up with. Check out the blaster silhouette on it. Makes me think of our logo just a bit! 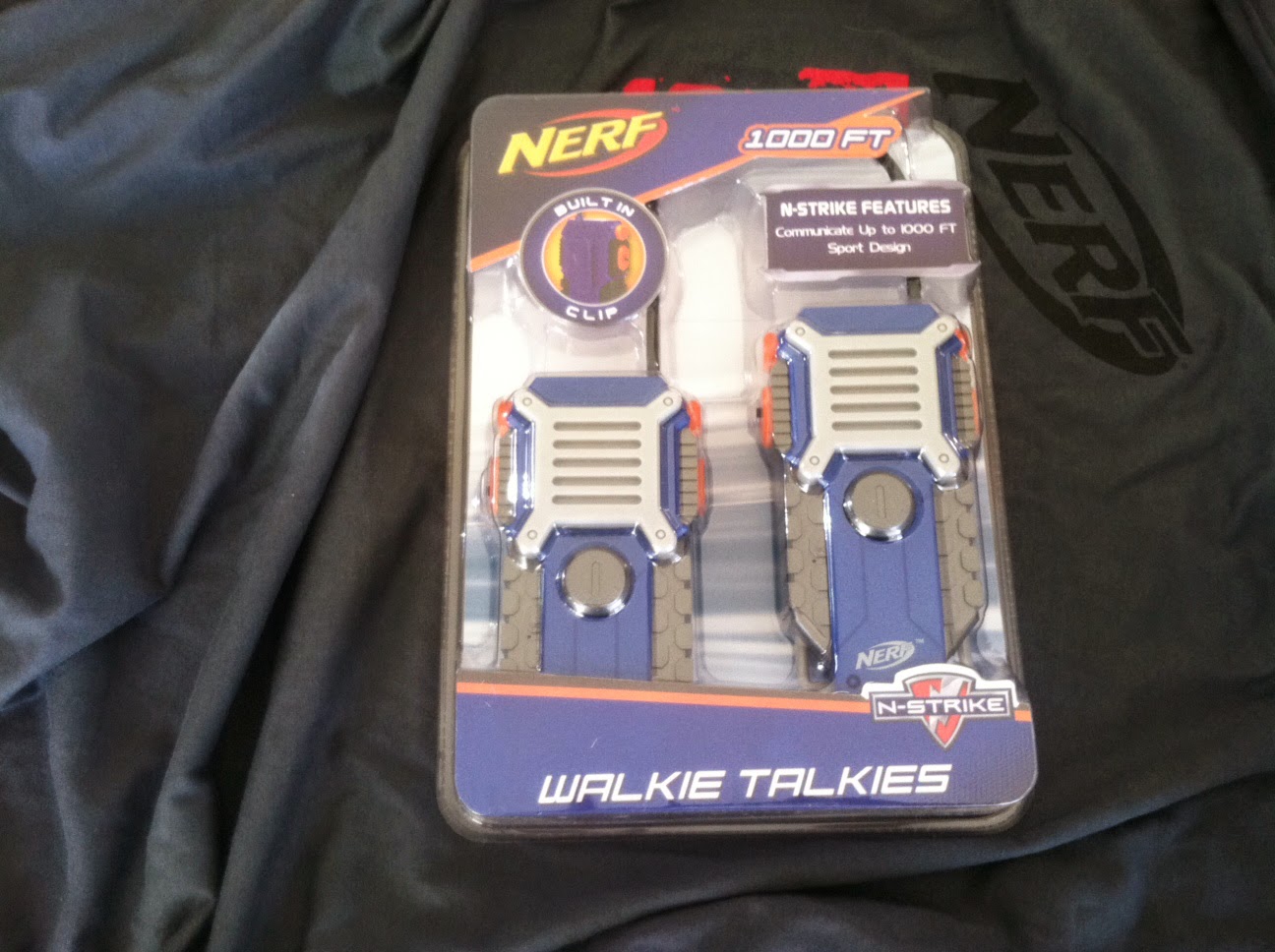 I've had my eye on the walkie-talkies for a while. Now we get to see how they hold up on foam combat! Have you had any experience with them? Let me know!

Keep your eyes open warriors. Within a day, I'll have highlights from an exclusive hangout some other bloggers and I got to have with some folks at NERF HQ. Even more new NERF coverage coming within a week from now! And about that giveaway? New details in the next blog! ~Chris

Writing to you from the airport in Seattle right now. Moved my brother out this way over the weekend and decided to include a couple of blog-related stops on the way. 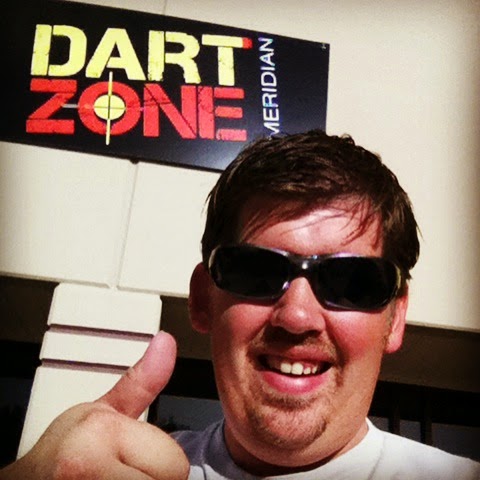 Sadly, I missed being able stop in at Dart Zone Meridian in the Boise area. They had a glow-war night on Friday that I wanted to check out. Such is the life when making a road trip. I did get to take a selfie in front of the sign and will be back to check it out!

The Dart Warz/Dart Zone warriors tell me that the Nerf Ninja was out in full force this weekend. I'm in the process of editing some commercial work for dartwarz.com and some war footage for the blog too! If you never got the chance, you should see the video episode about the Dart Warz folks here: 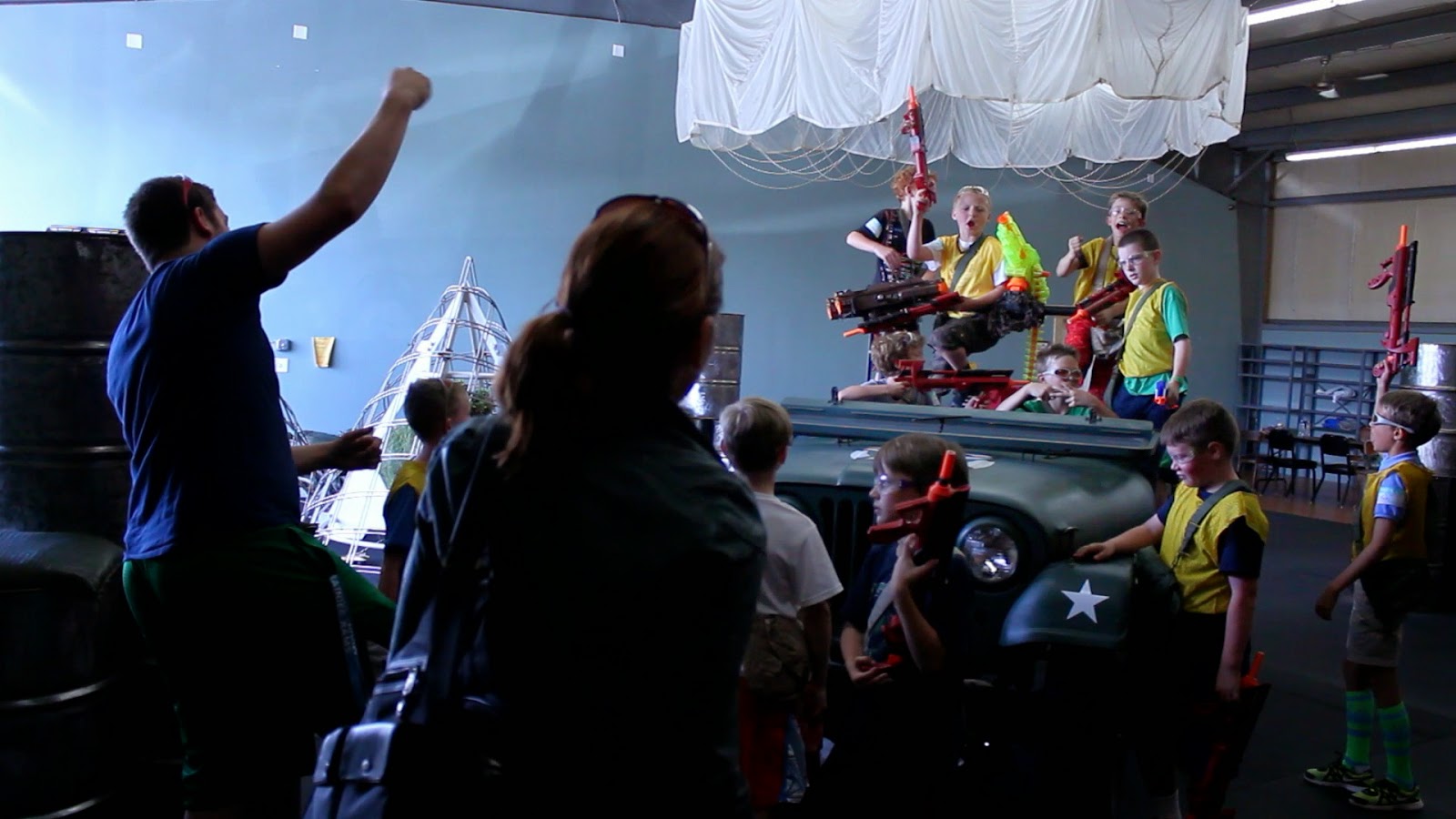 Yesterday, I got the chance to swing by The Tag Zone in the Seattle area. Tag Zone is another indoor NERF battle business, but built with a slightly more militaristic approach. We'll have to tide you over with these images while I catch up on all sorts of other work and life.

I fly back to Colorado Springs tonight and get right back to work at the day job. Keep your eyes open, though. Rumor has it that I'll be heading to the other coast soon! ~Chris 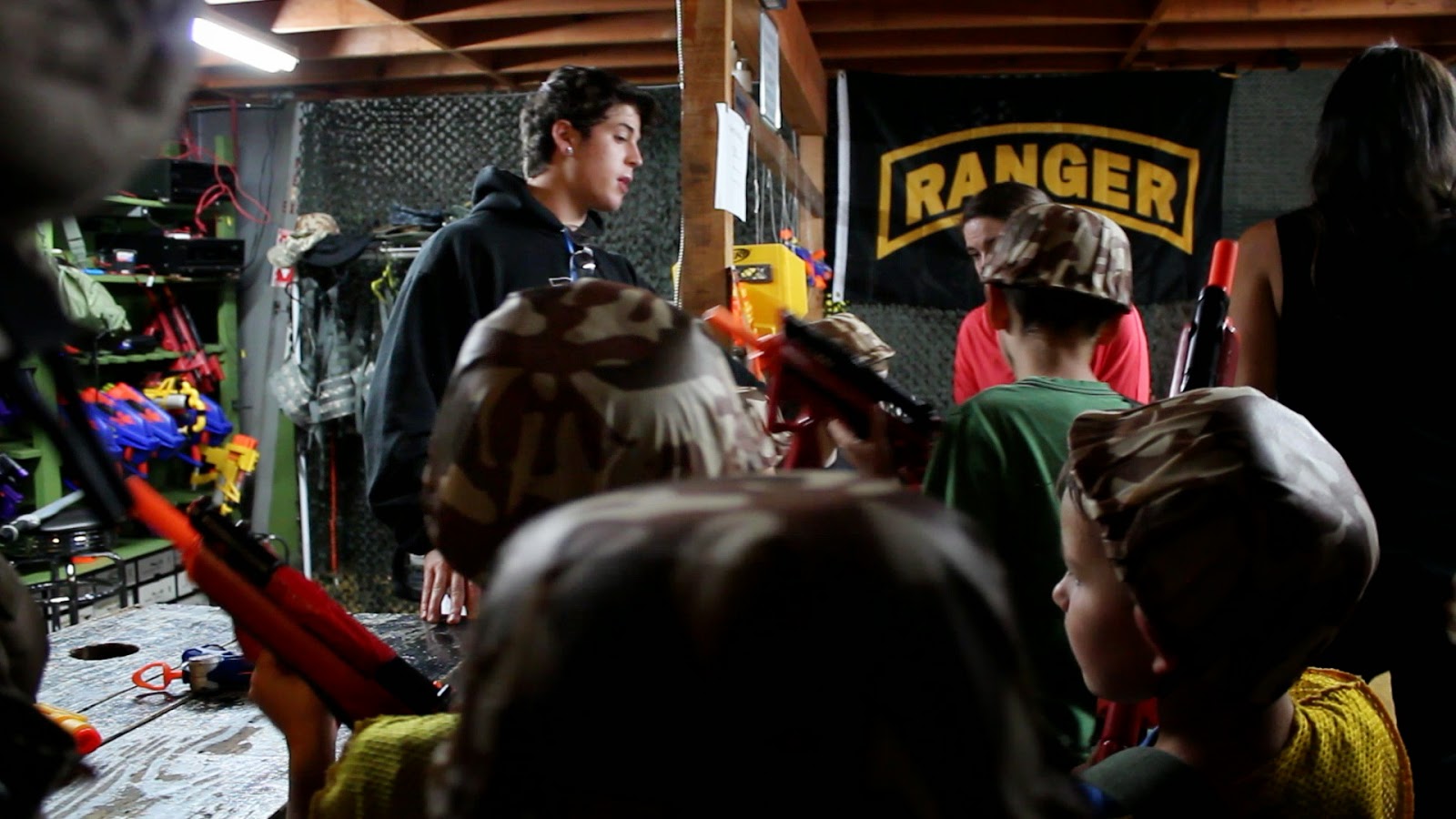 Warriors, have you heard of AirForce Blowguns? I started watching these guys develop a few months back after an article that popped up in a search. The article was out of the Daily Herald in Utah and was titled Family works together to create fun foam gun for all ages.

The writer gives a lot of the background of the family and the start of their endeavors. But, of course, you're going to want to get a lot more on the operation of the gun and how it works. Well, we'll get that covered!

Check out the unboxing and be assured that a review is in the works:

Warriors! Want to check out an experiment with me? We decided to pull out some food coloring with some of the new blasters that NERF hooked us up with. Food coloring, white t-shirt . . . You can see where this is going.


More videos will come. This season is a busy time in my day-job life, but we should be finding time to get tests on all these great blasters in the near future! ~Chris
Posted by Click Click BAMF at 9:26 PM No comments: