I'm sure by now you've seen and heard all about the new NERF Zombie Strike Hammershot and the Rebelle Sweet Revenge, right? Yeah, me too. But that doesn't stop me from talking about them! 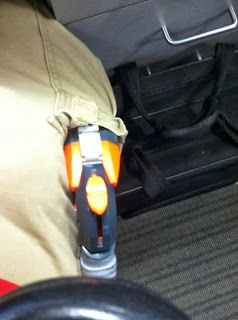 The joy of this system is that you can now fire a NERF sidearm completely one-handed. This is the first NERF pistol to mimic a single-action revolver like those made famous in the Wild West. The hammer can be cocked back with the thumb of the same hand you will fire with. This means a plethora of options has opened up. You don't necessarily need to drop your primary blaster to wield a sidearm anymore. You can dual-wield a blaster without the vacuum-like noise of a flywheel system. You can also make your weapon "safe" as a one-handed instead of firing it, should you change your mind. 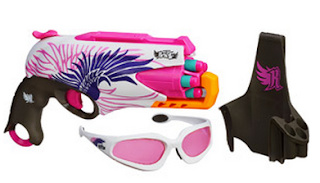 I'm still not sure which blaster I like better. I was getting used to the size of the Hammershot. Then I put the Sweet Revenge in my hands. I personally don't need to use the holster with my current load-out, but the grip may actually be better for comfort. I'll decide on that before the upcoming review.
Posted by Click Click BAMF at 7:45 PM No comments:

The Mission at Murray Chapel

It's awesome when a fun opportunity just falls in your lap. A couple of weeks ago, we had some young men from church over for a meal. They happened to look upstairs from the table and saw the Lanard Huntsman 50 sitting up there. Turned out they were planning to have a NERF War of some kind the next day.

I was able to take a half day off work for a couple of errands and then supply these guys. We set up a Team Deathmatch and some Search and Retrieve missions for them. Check out the video below to see how things went. ~Chris

Price Drop on Rapidstrike - Get 'em while they're hot!

A quick heads up, Warriors! As I was looking for new product in local stores, I came upon a better price for the NERF Rapidstrike. The MSRP is at $39.99, but the price is currently lower than that!

Even those crooks at Toys R Us got in on the action, lowering their price to $34.99. But, of course, the best deal I found in the Colorado Springs are was at Wally World. $29.88 sings for this blaster. As promised, the Rapidstrike review is in our line-up for the near future. We aren't experiencing jamming or rate of fire issues that some of the other bloggers seem to be talking about. This should be a great assaulter or defender piece if you use it right. More to come on that. 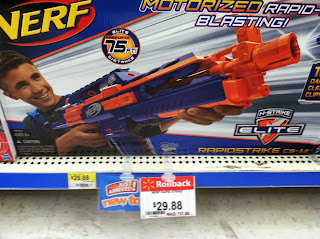 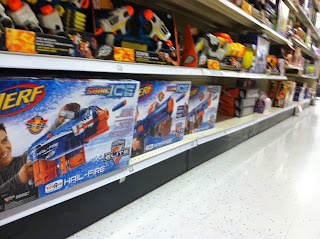 Vincent cook on youtube asked me the other day if I had seen the new Sonic ICE series from NERF on store shelves yet. I hadn't, but Toys'R'Us noted that the series was available for pick-up at the store in Colorado Springs. Sure enough, they've made it to shelves. I don't know what my local TRU guys are thinking because this new line is tucked on a bottom shelf under some of their Air Zone products. They're on the other end of the aisle from all the rest of the NERF!  These are a Toys'R'Us exclusive blasters, so you would think they'd be placed prominently on the shelves like their original Sonic Series blasters have been for the last couple of years.

Mini-rant: Personally I think that stores should be required to do a certain amount of featuring and promotion of their exclusive products. Why should they have exclusive contracts if they aren't going to show the product off? 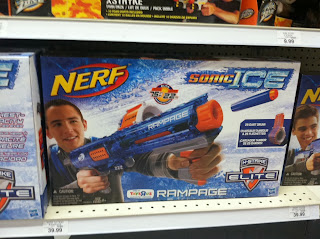 Mini-Rant 2: Why are these called Sonic ICE? There is nothing Sonic about them. Of course, there was nothing sonic about the original Sonic Series either (the translucent green blasters, exclusive to Toys R Us), but we had come to accept the name in the Nerf Internet realms. Now they come out with these ICE blasters and I figure they should have just kept the name at ICE. LOL, oh well.

Anyway, you can see the Hail-Fire in the picture above. Personally, I find the ICE Rampage to be the most appealing. If I was going to go out and buy an Elite Rampage, I'd be really interested in getting one of these! But not at the $40 price tag. Oops, here's another mini-rant. TRU is lame for marking up their own exclusive blasters too. It's already bad enough they do it on those available everywhere. Note that you can get the ICE Rampage online at toysrus.com for 29.99 as I write this, but you'll get gouged if you walk into a store without looking first.

Lastly, there is the ICE Retaliator. I still think there are better single-action blasters out there. If it's your cup of tea, cool. Again, watch out. TRU is trying to yank $40 out of you for this on the shelves too. 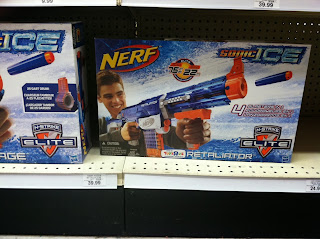 So Warriors; Some of you may remember when we did the review of the Range Master not too long ago. If you haven't had a chance to see it, you can take a look here: 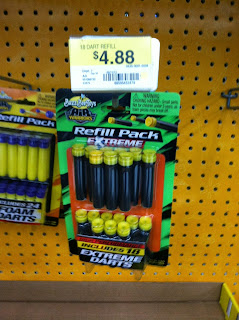 It was exciting to note that an updated type of Buzz Bee ammunition came with the Range Master (originally known as Orion). I wasn't quite sure of what to call the new dart version at the time, but Buzz Bee solved that one for us. Meet the new Extreme Darts to go along with their new Extreme Air Blasters! Obviously this naming convention is built to compete with the N-Strike Elite series from NERF.

What we know is that these suction darts are more dense and seem to travel much more accurately and at a longer range than the original Buzz Bee suction darts. Those that came with the Range Master were the traditional yellow foam and purple rubber. These Extreme darts that you can buy separately come with black foam and yellow rubber. That's cool, because it will be easier to tell the ammo apart if you have a lot to sort after each war!

There are several new blaster in the Extreme line that came out on shelves this Summer. It would make sense that all the Extreme blasters come with the new version of the ammo as well, but I haven't confirmed that for myself yet. I'm really looking forward to trying out some of the new Buzz Bee blasters soon -especially the Side Winder and the Auto Tek 20. Interestingly, those don't carry the "Extreme" name on them. Not sure what gives yet! 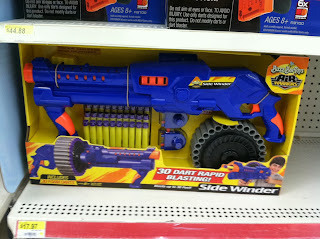 Another review up for you. It's very rare that we have to give NERF bad marks on a blaster, but that time has come. This is a great show-off piece, but not really something to use effectively on the battlefield -at least not stock.

Plenty of modders have mentioned that they like the Centurion for the amount of space and possibilities, but are you really going to want to drop 50 bucks on this for just the shell? What other ideas do you have for this one?