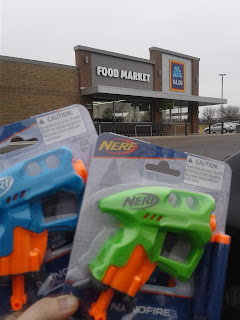 The wifey found the two colors of Nanofire out in the wild at ALDI here in Iowa just after Easter.

The Nerf N-Strike Nanofire is a new release this year. They've got it in blue and green. There are two holes on the top for horizontal ammo storage.

The official description:
This compact Nerf blaster lets kids take it almost anywhere to start blasting almost anytime! Load 1 dart into the barrel, pull down the priming handle, and pull the trigger to fire. Reload and fire again! Storage for 2 darts on the handle. Comes with 3 Elite darts. Available in 2 colors: blue and red (each sold separately).

Yeah, you read that right. It says the two colors are blue and red. So the question is, will we see a red one, too? 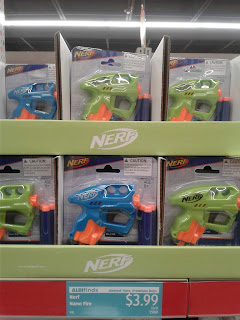 Many will just write these off as Jolt repacking, and that's not totally untrue. To be exact, this is a repackage of an older repackage of the Jolt. The blaster was called the Dart Tag Stinger that came out in 2013. The biggest draw I see is that you're getting good, usable blasters for family wars or single-shot-only games for 4 bucks if you get them at ALDI.

If you're not lucky enough to have an ALDI nearby, they're going for 10.99 on Amazon.com at this writing. Better yet,  go to www.hasbrotoyshop.com and get it for the MSRP of $4.99.

Sorry for the short blurb. Today, we're heading out for an anniversary game at Carnegie Stout Public Library in Dubuque, Iowa. We'll be recording a review on the road, finalizing interviews for our new series we've been promising and playing in two hours of non-stop Nerf action among the stacks in an actual Carnegie library!