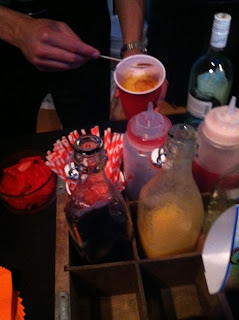 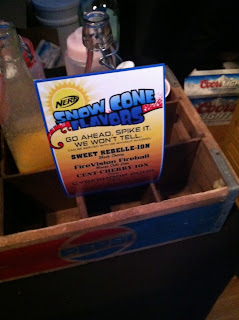 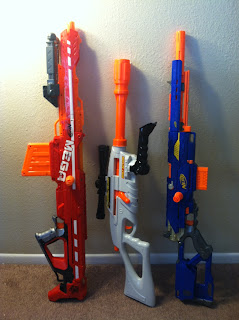 I've got a treat for you: The first actual comprehensive video of a MEGA Centurion un-boxing! Some of us in the blogging community are lucky enough to get a first look at these babies before they hit shelves. Speaking of which, check out Foam From Above's pic spam on the blaster. Glad to try this thing out on video! Check out the noise from it!! We even changed the opening logo sound effect this time in honor of it.

Well, What do you think guys? Any first impressions? Any questions burning in your mind. I'll have a unique opportunity to directly ask some of those questions for you in the next little while. ~Chris
Posted by Click Click BAMF at 7:10 AM 5 comments: 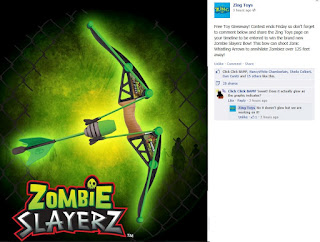 Finally had a chance to un-box the free Zombie Slayerz bow from Zing! Toys.

Of course, it's pretty much the Z-curve bow with a paint job, but that doesn't make me like it any less. With a half-strength pull, I can get more distance than most NERF guns! What would make me like it more is if they really do make it a glow-in-the-dark version like we talked about in the graphic to the left.


BTW, Did you ever see Coop's review of the Zing Air Hunterz Zip-Bak Bow? Check it below! ~Chris

Master of the Range?

We finally got the review up on the Buzz Bee Range Master. This came out at the time that NERF was first producing their Elite series of blasters. Check out the video for our breakdown of how this blaster performs in the categories of Speed, Range, Accuracy, Appearance and Value.

Did you see what this thing hits with its new suction darts in the Range category? While this blaster gets the good ranges, I'm still not sure it's a "sniper" blaster. If the Centurion gets what it claims and performs well with the Mega darts, it think it will out-class the Range Master. Accuracy? Yeah, this thing owns. As mentioned in the video, the scope can be used too -I'd say to better effect than the old NERF scopes.

Just ahead of our water fight on Saturday, I did some Vine videos when un-boxing the new Super Soaker blasters for this season. Figured I might as well spam them on the blog.

NERF sent us the Switch Shot, Arctic Shock and Flash Blast Super Soakers to test out with our warriors. I actually picked up a Shot Wave as well, but that was at the store one the way, so no un-boxing on camera. 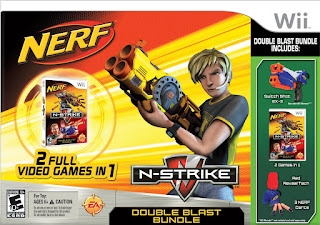 The Switch Shot actually steals its name from another blaster. have you ever played the N-Strike Elite game on Wii? That game has an accessory that is both a Wii controller and dart blaster called the Switch Shot EX-3. I was never completely sure why it had that name.             The new Super Soaker Switch Shot makes a lot more sense. You can switch between a normal stream, Triple Shot, Atomizer or Scattershot. Our warriors felt that the Atomizer (mist setting) wasn't really helpful for anything. Personally my favorite settings where the scatter blast and the normal stream. It was nice to have the option to switch between them. Granted, it's a price of $30 for the option. But the interchangeable stock and the banana clip (20 ounces) help satisfy the cost. 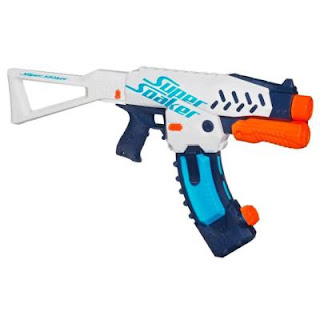 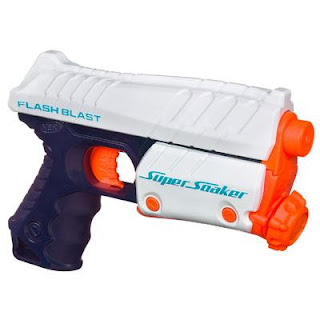 Oh, the Flash Blast. Check out our earlier blog for more info on this blaster. It certainly doesn't drench your opponents like their website description. But it is a good sneak attack weapon, as advertised. I imagine a couple of scenarios out of the Die Hard franchise of movies with this thing. Still, if you are looking for a reliable fall-back as a sidearm, this isn't it. Don't get sold on the idea that it can slam-fire either. It technically can slam fire, but that's not a feasible way to use the thing to be honest. It's a way to get yourself or your kid into the game for $9, buy I'd spend the extra buck and buy batteries for an Electrostorm. 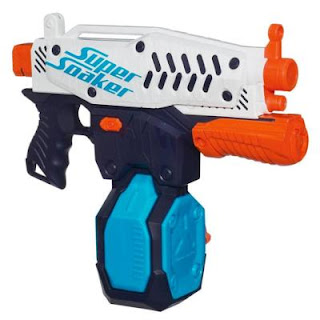 The Arctic Shock is just that -a blast of cold water. I don't know about you, but growing up I learned that trick about sticking ice into my blaster reservoirs to give my enemies that little surprise. The problem with modern water blasters is that most of them don't have wide enough inputs to fit ice easily. Well, as you can see in the Vine video, this blaster has an "Ice Drum" that solves that problem.  The one thing I would want to go with it is, of course, a stock! I love putting that stock from the Lightning Storm and now the Switch Shot on all the blaster that can take it. It provides stability and an awesome look. But without the stock, the price point might work for more folks at $20. More to come from the Click Click SOAK event soon! ~Chris
Posted by Click Click BAMF at 1:17 PM No comments: 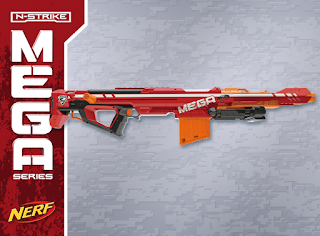 You've got to be looking forward to finding out how this performs. Have you seen the review for the Power 48 blaster from Air Zone? You can hear the NERF whistlers in the Range test as they hit an average of 97 feet. I imagine the mega whistlers will sound even better. Whistlers aren't an addition to shootouts like Popular Science says, but satisfying indeed!
Since before we had confirmation on the Centurion in late May, folks have been lookign for every scrap of information. I can tell you we'll have a lot more later this month. Keep checking back! ~Chris
Posted by Click Click BAMF at 11:38 AM No comments:

We hope your weekend was great and full of foam and water fights! As you may have read, we had our Click Click SOAK water war in Colorado Springs on Saturday. Loads of fun all around and lots of soakage. This gave us a chance to test out the Switch Shot, Arctic Shock, Shot Wave and Flash Blast blasters from this season's releases. Special thanks to our contacts with NERF for the support on this war! Much was learned.

First off, we forgot the sunscreen! It was a long enough winter that most of us didn't even think about the need for protection from the Sun. We were out there for about 3 and a half hours, so the glowing globe did it's work. I'm still feeling it as I write this. Even the guys who did get sunscreen on forgot to re-apply it. Remember, you're probably going to need more sunblock when swimming or water fighting! LOL

At the same time, we learned that the Arctic Shock is a good name. That extra wide mouth on the Arctic Shock water clip really helped get as much ice as possible in to the game. There were quite of few moments of shock on the field :)

Then we come to the Flash Blast. Love the look of this blaster. It is advertised as a way to sneak in a good shot and that's what it works best as. When my wife arrived to the event, I pulled it from where it was tucked in the back of my pants and shot her in the lens of her glasses. Shenanigans were immediately declared! I kept it nearby as a backup for a lot of the war. I figure My Last Dart could appreciate the strategy! Check out the POV video with the Flash Blast above. The sneak attack part can be fun, but I think you may get more out of the 2.6 fluid ounces in the Electrostorm (see video at the top) than you do out of the 3.7 ounces in the Flash Blast. Urban Taggers also has a pretty good rant about this blaster.

In the near future, I'll have reviews worked out for the new water blasters. Look for them throughout this season. Also, check the blog in about a week to see who won the war! ~Chris
Posted by Click Click BAMF at 10:35 AM No comments: