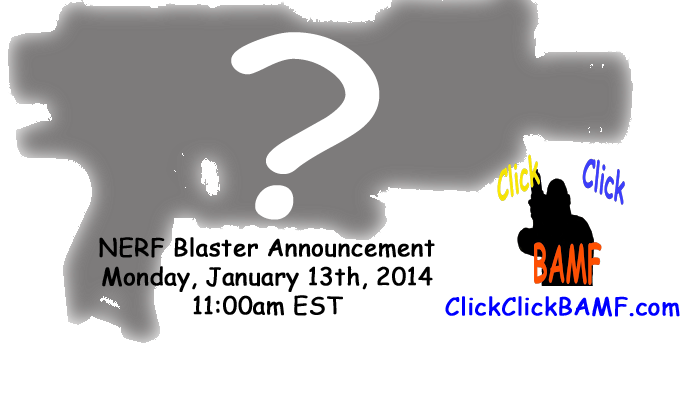 Warriors! NERF gave a few of the bloggers in the community a heads up that we will be hearing about and getting a sneak peak of a new 2014 blaster just ahead of the toy fairs that start later this month!


Monday morning, just after 9 AM mountain time, we will be bringing you some new details on what's in store for the NERF Nation in the near future. Others in our list of favorite bloggers will be getting the low-down as well. You can look for their blogs in our sidebar at the bottom!

(Check on some theories after the jump!)

Any guesses as to what the new announcement will reveal? Do you think it will be a niche blaster or an everything blaster for the basic warrior?

We've had plenty of sidearm releases already. Also, they usually pull out some kind of flagship product to show off at the fairs. So, I'm guessing we're going to see one of their beasts come out to play!

Some fans have been hoping for an Elite Titan. I have to say, I wouldn't be against the possibility. But could you imagine a foam rocket at those ranges? Safety has to be involved in all decisions, so that's not likely to happen, but dreaming can be fun. Others are still holding out for another sniper release. There had been rumors floating around about one that matched the Centurion for distance while firing elite darts. I think the MEGA Centurion was probably it for a while, but you never know.


Here's another theory. What if they upgrade to Vortex MEGA now that they've done it with the N-Strike Elite? Hours of fun for you and your dog! I have to credit Vas at Foam From Above with the frisbee idea :)

Okay . . . so none of these are likely to be it, but it's fun to mess around. If they really want to please us, they could announce multiple additional tac rail accessories while they are at it . . . We'll see what comes Monday.

What do you hope for, warriors? N-Strike Elite or Vortex? Big or small? Fast and furious or quiet and subtle?
~Chris
Posted by Click Click BAMF at 7:02 AM