I have to admit something, warriors. I got a little worried when I saw those couple of early Super Soaker releases the other day. I actually really liked the 2013 releases and was look forward to more of that line. When I swung by to toy section at another Walmart this week, I happened to see a Flash Blast with updated coloring and went back to look at NERF's Super Soaker section on their website. 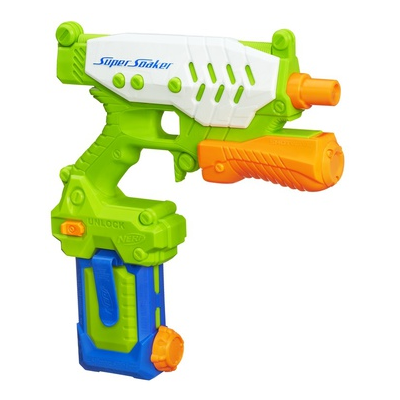 It looks like a few of last year's blasters will be making it to this years shelves. That will include the Shotwave from 2013 with the water clip too. Granted, I thought the Shotwave was one of the more awkward blasters, but it bodes well to see a water clip system update! Also, while Hasbro has updated the website to include those 2014 releases, they have pulled down other 2013 favorites like the Switch Shot or the Arctic Shock. Perhaps those will still hit the shelves too? But will they have the new colors?

I haven't decided my feelings on the new color scheme yet. They're really . . . bright. It's a bit of a throwback to previous generations. Which do you prefer? The 2013 color scheme or this years? ~Chris
Posted by Click Click BAMF at 10:54 AM