I'm not too sure what to think of the newest blaster to be announced from the NERF Fall 2014 line-up. The NERF N-Strike Elite Cam ECS-12 is a bit of a mouthful, but at the same time will leave your pocket a bit empty. Engadget popped up this little beauty today. Check them out for the full story. I'll just scribble some thoughts here rather than take and repost all of their pictures and such.

Here's what Nerf could officially confirm for us: "The blaster will be the first Nerf blaster to feature a built in camera, with the ability to take both still shots and video. It will come with a 12-dart clip and 12 N-Strike Elite darts, which it will be able to fire up to 90 feet."

75 dollars is the most expensive price tag I've seen on a stock NERF blaster. That gets to be pretty steep on the pocket book. If I am dropping that much, it should be able to cook me breakfast too . . . or just shoot better video. The idea of an integrated camera is a cute, but the quality of the camera is low enough to lose my interest at this point (.3 megapixel, 20 fps, 1.77 inch screen). I'd rather spend my money on, say, a Demolisher and put the rest of the cost I am saving on the Cam ECS-12 toward a real camera later.

It IS important to keep in mind that this is a prototype that was being covered. Thus, there could indeed be changes to the final product, including the indicated price point. In the concept picture above, you can see that they plan on a clear 12-dart magazine for the Cam Blaster like they have on the 18-round magazine for the Rapidstrike. I'm also going to take a guess (and hope) that the working title will be replaced as we move forward. 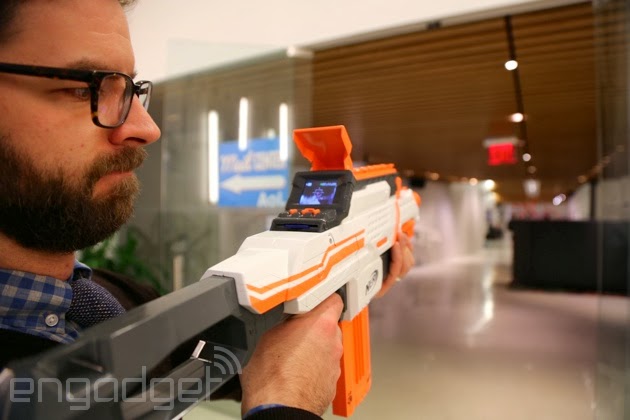 I find it interesting that the last line from the Engadget folks in their article is that, "NERF guns [sic] aren't designed with grown men in mind." They were particularly talking about size, but I think they were wrong on more than one count here. I think that blasters like the Rapidstrike and Centurion prove that NERF is keeping adults (or kiddults) in mind with their size considerations. From what I see in the demo video, these guys must have a humungous frame if the stock is considered "stubby" to them. It doesn't look bad against the guy pictured here. Also I can't see how a blaster like the Cam ECS-12 would be expected to be a kids toy as much as for older Nerfers. The price point is just too high for me to believe otherwise.
Posted by Click Click BAMF at 11:57 PM