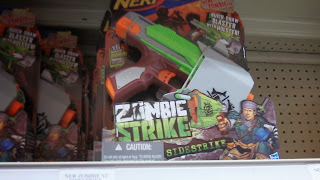 I am really rather pleased with this sidearm. As I say in the unboxing video, I was expecting not to like this so much because it's not a Zombie Strike 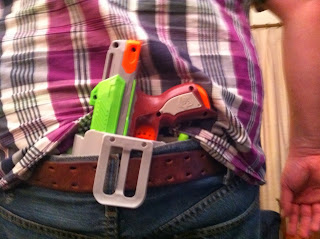 Hammershot. However, this thing holds its own. I think that the pull is easier from the Sidestrike holster than it is from the Rebelle Sweet Revenge holster. Also I saw a great opportunity to conceal this pistol by tucking it in my back.

The tac rail on the bottom of the Sidestrike could be cool, but it's not really effective when the thing won't fit in the holster with other attachments. I guess you could do a tac light or something if you weren't planning to holster it again for the duration of your war. The one thing I really wish this pistol could accept is the stock attachments. It would be awesome to try the Spectre's silencer on this bad boy. 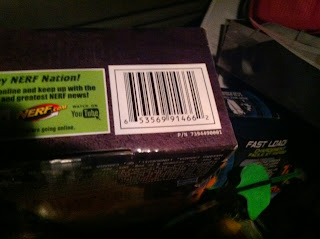 For those of you who would like the info, I also snapped a pic on the UPC on the bottom of the box.

The box advertises a Zombie App from NERF, but it doesn't seem to be active yet.

Well be getting more Zombie Strike 2014 as it comes out. In the mean time, you can find some coverage on some of the other blogs. I am really looking forward to getting my hands on the Crossfire!
Posted by Click Click BAMF at 10:01 PM