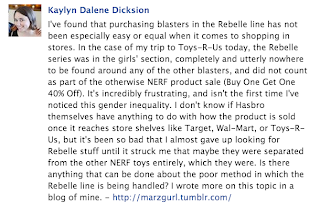 Personally, I have seen different treatment of the Rebelle line depending on what store I am standing in -not just depending on what company, but depending on what location. Some Walmarts have Rebelle located in the traditional "NERF" area with the boys' toys and then more Rebelle placed with the traditionally girls' section. Some stores have an end-cap display at the end of one of those two rows. Target stores in my area just suck completely with ANY NERF placement. While product location is actually a shared responsibility of the product marketing team and the store merchandising team, some level of the store management is going to have the final say on product placement in their locations.

The same goes for decisions on sales for entire brands within a store like on NERF products. Unless it's a manufacturer's coupon, the store is making the rules. Why would you blame NERF for TRU not honoring their own sale on NERF for Rebelle items? TRU has been gouging NERF fans on prices and sales for good long time. Marzgurl says she has been a NERF collector in recent years. Maybe she's just not been in TRU very often? 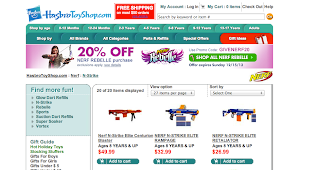 The misplaced raging on the interwebs is getting annoying. If there was any mention of how NERF segregates the brands online and there are no links directly between the promotional sites for NERF and Rebelle, maybe I would give her more credit. On that note, if you go to the Hasbro store to actually purchase ANY NERF products, there are hyperlinks to all the other NERF lines. BTW, I just saw that Rebelle is 20% off at the Hasbro Toy Shop through Sunday (12/15).

Marzgurl goes on the suggest that companies such as Lego don't market pink, girl-specific toys to girls in other places within a store than where their products normally are. Even users on tumblr correct her on that one. Ever heard of Lego Friends?

Then her argument just gets special with a suggestion that her proclaimed Rebelle dilemma is offset with the idea that "bronies" are in love with My Little Ponies" products, but that the makers (Hasbro) and TV Producers didn't move that brand to the boys' toys area. Invalid! NERF didn't make Rebelle, realize girls like it and then move it to the girls' area. Rebelle is a series specifically made for and marketed to girls that might not otherwise consider purchasing NERF products. They don't have a separate aisle for Bronies' products because they aren't marketing a DIFFERENT PRODUCT to Bronies! Not even a different color! BTW, what do TV producers have to do with product placement in stores?

Ultimately, most people, including NERF marketing folks, agree that all of these products are for anyone that wants to use them. There is no different viewpoint on equality. NERF puts it well in response to a post about the Rebelle Heartbreaker Bow.

So, this got long. What do you think? Does this "crap [need] to stop" as marzgurl says or is there any crap to stop? Can we just have a NERF war with our friends or do we need to march on Hasbro and other toy makers for equality? ~Chris
Posted by Click Click BAMF at 2:28 AM