Warriors, if you haven't heard of the Thunderdome, you should check out the concept.

It takes the idea of a Nerf Arena and puts that right in its creator's back yard. Literally. It's a Nerf arena in a guy's back yard of his house. But that's just what physically exists in Springfield, Missouri. The concept is what creator Rob Lehr does with his love of Nerf and his unique space. Unlike other, commercial arenas, Thunderdome is meant to be free to those who participate in it. Lehr says he wants to spread the concept around to other communities by helping people to start their own clubs too. It's more than just a Nerf Arena. Lehr explains loads more about it with me in the interview we sat down to do this yesterday morning. Check it out:

More info after the jump! 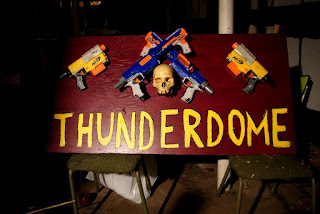 Rob was great to sit down with me this morning. He was running on a couple of hours' sleep after rocking an all night Thunderdome session and working his tail off with life and everything he is doing in conjunction with the kickstart project.

Rob and the producers behind the trailer for an upcoming Thunderdome documentary do a pretty good job giving us a taste of what they want to do with the full feature. But they are asking for your help to accomplish it. There are several days left in their kickstarter project. I've got to say it starts out strong with the first reward being "A DART WITH YOUR NAME ON IT SHOT AT ROB’S FACE". It's funny and to the point. Other's follow suit. Check it out and see if the project fits your interests! 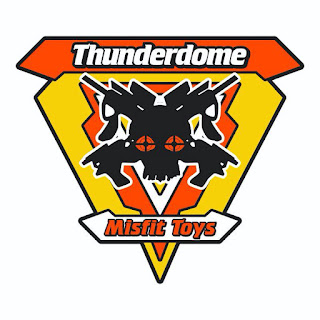 Face Your Fears, Build Your Dreams -I am pretty impressed with the subtitle they have put on the project. As a 30-year-old, I am looking at what my adult life has been over the last decade. My wife and I talk regularly about what we want out of life. As we talk, I realize that fear can be stifling to what we really want to do. For Rob, the struggle is a bit different. Surrounded by encouraging friends, he used artistic projects to combat the effects of PTSD. Thunderdome was apparently born out of that endeavor. Now it is being offered up to others as a place to enjoy and maybe face your fears too.

With much of the photography already done and attention from other Nerf enthusiasts like Lord Draconical, I am excited to see what Lehr and the Thunderdome team pull out of this and what inspiration they can share! ~Chris
Posted by Click Click BAMF at 10:07 AM