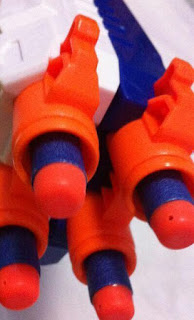 Our contacts at Nerf will officially note that the blaster leaked in these images is called the SplitStrike. It's set up to be a Walmart exclusive and to be sold starting August 1 of this year. The suggested retail price is supposed to be $19.99 which is a bit steep-sounding for what it can do.

They didn't call it an Elite blaster, but the writing is on the wall . . . of the blaster if you look closely in a shot.

They don't have any official images yet, but are working on getting us some beauty shots and a little more info. 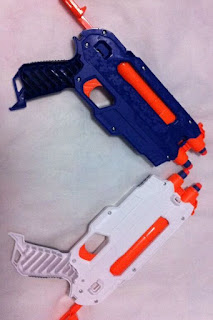 It looks like it will function just as some others have surmised where you can use this as a single blaster or 'Split' the unit apart to have a white blaster and a blue one separately.

You can see the extra piece -the nub on the bottom of the grip so that you can prime each blaster by using the grip of the other. This is something we saw on the Firestrike blaster when the Elite line was coming out.

I'm really interested in seeing how convenient the trigger assembly is to use when the blaster is 'whole'. From this image, I almost wonder if there won't be too much separation to comfortably use it in that form. 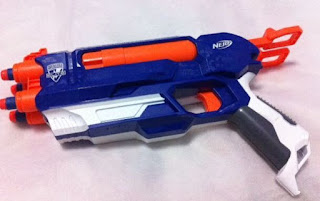 EDITORS NOTE: Warriors, we are not always going to be the fastest blog when it comes to leaked information. There are two main reasons. One, my job that puts food on the table is really demanding -especially Monday through Friday. Two, we don't advocate, perpetuate or condone the theft of intellectual property if we can help it. We'll be all over accidental official leaks when we can find them, but you won't normally see us sporting images that look like they came from theft. Thanks!

As you may know, we are starting to come up on the season where Nerf officially announced plans for Fall 2015 and generally we hear about Christmas soon after - or, at least what feels like soon after. Let us know what other questions you may have! ~Chris
Posted by Click Click BAMF at 6:52 AM