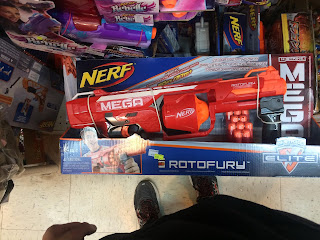 Reddit has it boys and girls. User, _Emotionless, posted a find from a store in Hong Kong in the Nerf subreddit.

_Emotionless found it listed at 298 Hong Kong dollars which translates to $38.44 in US dollars. That's not bad considering the MSRP below.

The Rotofury is something we've been hearing about officially since January. NERF sent our the press release with these details back then.


***NERF MEGA RotoFury Blaster***Image and Information Under Embargo until 1/19/15
(Ages 8 years & up/Approx. Retail Price: $34.99/Available: Fall 2015)
Supersize your NERF battles and dominate the field with the highest capacity MEGA blaster ever! The MEGA RotoFury blaster gives you the option of firing one MEGA Whistler Dart at a time, or slam firing a steady stream of ten darts in a row. Hear the darts whistle as they fly through the air and hit targets up to 90 feet away.  Includes 10 MEGA Whistler Darts. Available at most major retailers nationwide and HasbroToyShop.com. 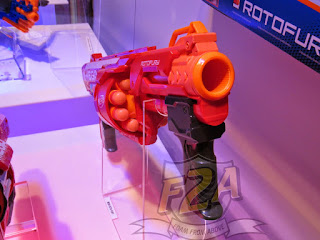 Good images of the blaster have been coming out since Vas from Foam From Above was blasting out images from his annual visit to the Toy Fair! I am excited to see which other blasters from the fair will come out soon. Look over at F2A for images of the other cool blasters such as the Thunderblast which I am totally excited for!!

I want to get hands on this blaster. The assumed mechanics in this one remind me a lot of what I expected the NERF Vortex Revonix to be. Pump-action blasters please me when they are fed by a magazine. Generally the ammo feed works out pretty well in that case. I haven't had as much luck with the turret/barrel situation on pump-action. Really want to try it out, though! ~Chris
Posted by Click Click BAMF at 7:03 AM