Recent rumors and news got me thinking: Do we really need to have zombie-specific merchandise? There are now at least three blaster companies reported to be involved with making zombie-hunting blasters. Let's take a look at the notable releases.

Toys R Us sells HvZ blasters -well, one HvZ blaster. They're really Air Zone blasters with a paint job. I was a bit annoyed by this. Air Zone is generally a miss for quality blasters. It's not like that should come as a surprise. So when Gnarwhal studios (the original HvZ folks from Goucher College) went with Geoffrey to do their official blaster line . . . it was sad. Doesn't seem they were so successful either. If you look at this as a way to support the original guys that started Humans vs. Zombies, I guess that might be something. But you'd think people who are trying to make a business would go with more quality. 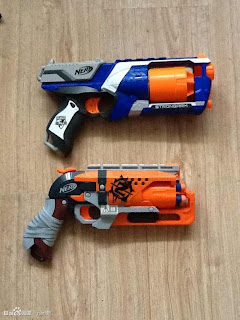 Rumors with pic spam have started circulating about a "Zombiestrike" blaster. A user called yayaccav, posted pictures and then a video. The "Hammershot" has been attributed to NERF and has the logo on it. Doesn't look like a mod or hack. Actually, it looks like an alternate version of one of the new Rebelle blasters they are releasing (marketed to girls). The Baidu pics and video have since been removed. Some of my fellow NIC bloggers found a state-side video too, if you care to look.  Nothing has been confirmed. Please keep in mind that this is still unofficial. I would not recommend promising money for this blaster to any retailer or third party seller yet.

If this blaster is confirmed, this will be one of the coolest sidearms. Looks like it will operate much like a wild west six-shooter, or . . . five-shooter. Even if it is a NERF Rebelle repaint, I don't mind if they release it within the season as an alternated for those who don't necessarily want pink.

Zing Toys seems to recycle their famous Z-Curve bow with other branding like Air Huntress (a pink version) and now Zombie Slayerz. I don't necessarily take issue with that. Especially when they say they are working on a glowing version! A consistent and quality product that can hit 125 foot ranges can re-release as many copies as they want! Keep in mind that HvZ Goucher-style (original+) rules specify that a hit shouldn't hurt. Be careful using the bow, if the moderators allow it. I'd like to see a Hawkeye look-alike picking off zombies with a bow! That just sounds fun.

One of our contributors won the recent Zing Toys contest, so we'll be looking at this beast soon. 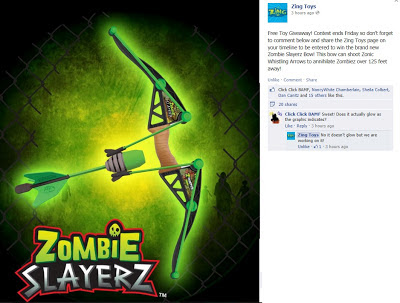 So out of these, it looks like NERF might be the first company coming out with a zombie-specific release -at least at the same time the blaster comes out in another color scheme. It seems to be more than an afterthought. Zing has a quality product now marketing for zombie-hunting too. My question is do we really need anything marketed specifically for an HvZ game? Are you going to be more inclined to but something because it is zombie branded? ~Chris