This past week brought the launch of an innovative kickstarter listing. Tek Recon has launched a 31-day bid to get $50,000 in crowd-funding from users of the famed kickstarter website. As I write this, they have 30 days left and are just over $6,100 on their way -a little over 12 percent.

President and CEO Brad Pederson says that this move is their most ambitious in company history. That makes sense, considering that it's time to put these things on the shelves.


"Two years ago we set out on a mission to bring video games, online connectivity and social interactive play together through innovation and great product design", says Pederson. "The outcome, TEK RECON has come to life and created a phenomenal play experience that has exceeded our expectations.”

I, for one, am very excited to see where this effort goes. Will this be that successful way that so many health professionals have been looking for to get kids off the couch? Campaigns have worked mildly recently, but there is not a massive appeal for those who would rather play Black Ops. Some folks will still not be happy because the game will still involve computer screens in the form of smart phones and other devices. 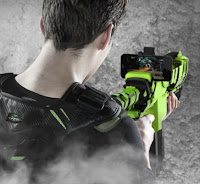 Is this the next step in gaming? Google glasses came out recently. I dreamed of a foam blaster or airsoft game where you could use those glasses for objectives and power-ups. Perhaps this is the step just ahead of that. A geek can dream!

At this time, the app is free that they offer to integrate a real-world blaster with online gaming. If they keep the prices for Hammerhead and Havok blasters at 25 and 40 dollars after the kickstarter promotion, I won't accuse them of overcharging to make the app "free" either. The app is exciting because of their promise of the use of GPS and the heads-up display. If you can set objectives for the app to help you track, perhaps it can include both game objectives and physical activity goals?

There are a lot of positive notes for this launch. Ultimately, I am all for it and will back the project too assuming I have the funds. Yet there are several questions left to answer as we move forward. 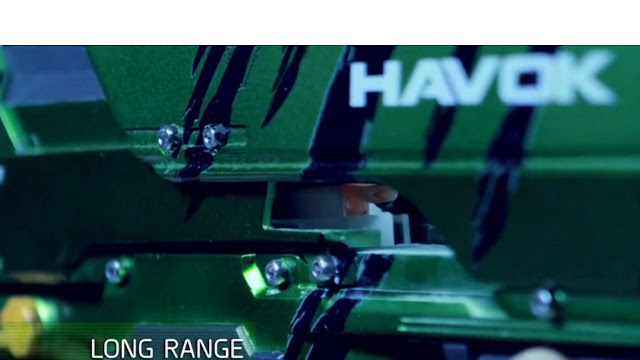 If you take a look at the video on kickstarter, there seems to be damage occurring to the NRG rounds as they build their "kinetic stretch energy" to fire. If you look closely at this shot in the video, particles of  . .  something are falling from the blaster after the round launches. Tek Recon says on kickstarter that the rounds are reusable, does that hold true and for how long? Also, how much will the refills actually cost? Keep in mind, this shot is from a demo of the long range setting. They've indicated that you can modify the range with a setting. Perhaps sacrificing distance will preserve your ammo?

Back to the app questions: Is this app meant to track if you get hits? I (and other journalists I showed the video to) skeptical of the usefulness of the app for tracking hits. I personally came away with the impression that it could be meant to function that way from the cup shooting demo in the video. Perhaps it was a misconception. Either way I am geeking out to give it a try!

I am also super-curious about further app development. They talked about power-ups in the video. Will those be something you can program and print for scanning or that they want you to buy? Will they allow other developers to design and contribute QR codes et cetera?

Obviously these questions should be asked to them and we will direct them there! Are there any other questions you are thinking of while we are asking? You can check out their kickstarter campaign for yourself here: http://www.kickstarter.com/projects/graemebissett/tek-recon-the-first-real-life-video-game