Tek Recon got back to us today regarding that hanging question about their apps. Doesn't sound like they are expecting contributors right now, but we did learn more about the power ups! Foam/rubber drone attack anyone? Not really, but on the screen! LOL!

Q: They talked about power-ups in the video. Will those be something you can program and print for scanning or that they want you to buy? Will they allow other developers to design and contribute scannable QR codes et cetera?

"A:POWERUPS WILL BE INCLUDED WITHIN OUR "ARMORY".  HERE YOU CAN SELECT WHICH BLASTER YOU'RE USING (WHICH ALTERS THE AMMO COUNTER), SCOPE, BLASTER SOUND EFFECT FOR FIRING, AND POWERUP.  YOU CAN USE 1 POWERUP PER GAME AND THERE WILL BE MANY POWERUPS AVAILABLE!  HERE'S Are A FEW…..BUT I CAN'T REVEAL THEM ALL :)

–Invisibility: Turn this on and you won’t show up on radar for 45 seconds
–Drone Attack: While an opponent shows up on radar, if you enable this powerup and click on their blip before it disappears it sends a drone attack and removes them from the game.  Click too late and the drone misses.
–Wire Tap: Enable this powerup and open up communication with the opposing team.  Can talk to them and hear their messages for 1 minute.
-Disable Flag: disables anyone from scanning your flag for 20 seconds" 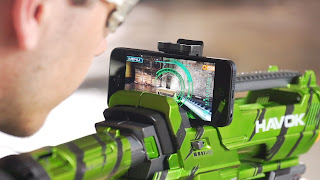 A few people have already been asking if I think this will mimic COD: Black Ops perks. I don't think you'll be seeing things like "flak jacket" and "hardened" manifest in the game. "Ghost" (or Invisibility) is doable because you could just be taken off the HUD -in this case for 45 seconds.

Here is some of the earlier information we learned about the app. Be sure to visit the Tek Recon kickstarter to learn more and to contribute!


A couple of more new tidbits on the way today! Check in later. ~Chris
Posted by Click Click BAMF at 6:16 AM