Check it out, Warriors!

Not only did NERF officially announce the Zombie Strike line for August 2013, they now have revealed Zombie Strike releases for early 2014 too! While the 2013 blasters are exclusive to Target, these blasters will be available at most retailers and HabroToyShop.com.

Meet the Zombie Strike Crossfire bow. They say this bow is "boasting 75 foot ELITE distance and authentic pull-back firing action". It comes with four of the new Zombie Strike darts. You can see that it seems to have the fitting for a stock attachment on the back. But it looks like none of the new line comes with an actual attachment. We'll have to see if the current attachments look okay with this thing. I don't hold high hopes with the yellow, blue or mostly white blending with this crossbow to look good. The Crossfire has a suggested retail of $19.99. They say this will have the honors of being the first crossbow in the NERF line in almost 20 years. Which leaves me asking when we will see the NERF Rebelle crossbow.

The new NERF FuseFire hails from the Vortex line to join the Zombie Strike blasters. This looks a bit similar to the NERF Vortex Vigilon, but just different enough. A big thing is that this blaster will sport glowing discs. It seems like they must have added firefly technology into the blaster again, instead of a clip like the Rayven and Lumitron blasters. They've also added a storage option on the front of the blaster. Five discs will tuck into the front of the blaster. I'm wondering if they cut down the size of this blaster from the Vigilon enough to fit into a cargo pocket. The release says that this system will host a continuous loading system. From the pic, I'm assuming it will be something similar to the Proton's loading feature. This will also post at $19.99. Not sure I'd pay this much for a pistol, no matter how large.

At this point, I noticed that the blasters started having their names typeset on the side in a courier font. This is a win for me because I was a big fan of the typeset in the original Resident Evil on Playstation. That and X-files! It brings back memories and smiles. So there . . . moving on.

The next in the line of announcements is the NERF Zombie Strike SideStrike. This is a front-loading sidearm where you load one at a time, then prime and fire. It will also sport a holster that they say will be compatible with the NERF Elite Firestrike. That makes sense considering that they are similar blasters to begin with. This is also said to  boast the ELITE 75-foot ranges. The proclaimed retail price will list at $14.99. I'd complain about that except for the NERF-specific holster for sidearms. I'd rather they make a holster for the Hammershot, but maybe that would be too bulky.

They don't have much to say about the new NERF Zombie Strike Blade. In reality, it looks like a re-make of the NERF N-Force Vantage. Perhaps the most notable thing is that this means that they haven't given up on the N-Force products completely. It's going to sell at a suggested price of $12.99. 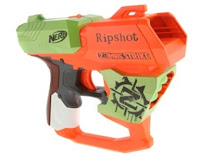 The NERF Zombie Strike RipShot will also sport an integrated disc storage. It will store 3 discs in the front. It's pretty straightforward other than that. They call it "stealthy" but I think they are just trying to say it is more easily concealed. It sports a suggested price tag of $9.99. I'm not sure I would feel the need to by it over the Proton if we weren't so interested in getting every blaster for testing! 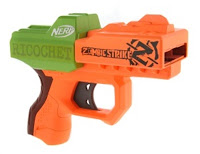 The NERF Zombie Strike Ricochet. Another NERF Vortex pistol design sporting the Zombie Strike branding. I was about the razz NERF for making too many pistols for this line debut, but perhaps I should hold off. "Pocket-sized but powerful" makes this sound like the Vortex version of the Jolt. Worth checking out at $7.99? Yup.

There was not a picture, but NERF is also releasing a Zombie Strike target set next Spring. They say it will include "one small ZOMBIE STRIKE blaster, three ZOMBIE STRIKE darts and a ZOMBIE STRIKE target". They don't specify what the small blaster will be. Perhaps a zombified Reflex?

So, in all, I'd certainly looking forward to Spring of 2014 for the further Zombie Strike releases. Which of them are you most interested in? ~Chris
Posted by Click Click BAMF at 10:47 PM