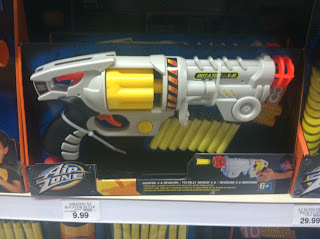 When I first walked up to this blaster in the local Toys 'R' Us, I thought I had found a promising answer to the "rumored" NERF ZombieStrike Hammershot we'd been reading and hearing about. Could it be that Air Zone had brought something that would compete?

If you look at the hammer on the upper left, you'll see that there is plastic molding covering it so that you can't cock the hammer back yourself. For just a moment, I wondered if this thing would have a double-action trigger (meaning you can just keep pulling the trigger to fire) and beat the Hammershot, but no. Even the marketing folks tried to hide the priming rod that is placed under the handle by placing their cardboard logo over it. For ten bucks, we decided to grab this and see how it would do.


At this point, I think the X-8 was almost a great blaster. That's not to say it isn't a good blaster. But I'd probably still recommend buying the Strongarm for a couple of bucks more. The X-8 uses unique ammo that doesn't even seem to work with other Air Zone blasters. The Strongarm will give you elite darts that work with many other blasters you are likely to encounter in a war. That means you can pick up other ammo for a return fire as well. A detailed review to come in the future. ~Chris
Posted by Click Click BAMF at 12:41 PM