Hasbro and NERF have seen fit to officially announce the new Zombie Strike line for 2013 and 2014! In the official release it is "Zombie Strike" rather than "ZombieStrike" like you might think from looking on the boxes.

If you've been paying attention, you've already seen some information on the 2013 blasters - Sledgefire and Hammershot. Both are supposed to be available August 1st exclusively from Target along with a 30-dart refill package we showed you before. Read on for some thoughts on those or click here for the newly announced Zombie Strike blasters of 2014. 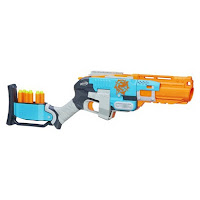 With the Sledgefire they say: "A new triple dart shell-system allows for simultaneous multi-shot blasting and quick dart reloads on the run while extra storage space for darts keeps zombie invasions at bay." It's official retail is listed at $27.99, but whereas Toys'R'Us upcharges, Target seems to beat their own prices. So, we may see that price a couple of bucks lower.

The Hammershot is still the most interesting release in my book because of the "unique pull-back hammer mechanism". The chance of this blaster becoming a go-to sidearm for many warriors is high. Can't wait to get out hands on it for a good set of tests. 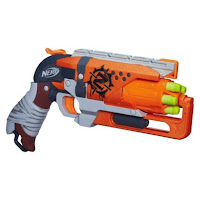 I'm still not so excited about the Zombie-specific line. The blasters, yes. However, Zombie Strike branding won't turn me off of the line either. I;m just saying it's not actually necessary when you already have great products. ~Chris
Posted by Click Click BAMF at 10:46 PM