This post will update with images and thoughts throughout the week.

Now for a couple of Nerf things we didn't really hear about during the Toy Fair 2018 coverage and a few things we just have more on. 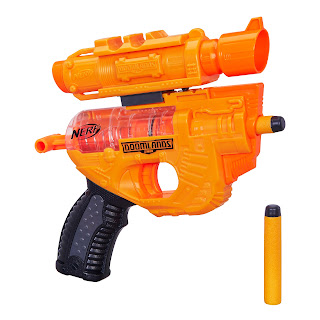 The one I didn't hear a peep on or see anything on for sure was the Nerf Doomlands Holdout. The pic comes from our friends at Nerf and the description comes from their Hasbro Product Page.

NERF DOOMLANDS HOLDOUTIn a post-apocalyptic future, the Earth is left a barren, lawless wasteland. Out of the ashes, a lone hero emerges to bring justice to a doomed land. This is the world of Doomlands! Scope out some action with the Holdout blaster, which has a removable targeting scope that slides onto a tactical rail. Load a dart into this single-shot blaster, pull back the handle, and pull the trigger to fire. Includes 2 Elite darts that can be stored on the scope.• Includes 2 blasters and 2 darts.• Single-shot blaster• Detachable scope• Includes 2 Elite Doomlands darts• Transparent area reveals inner firing mechanism• Ages 8 and up


There aren't details about what the motorized blaster actually is in the Ultimate Customizer Pack. Based on some recent potential leaks in the Asian market,  I wonder if it will be a Rapidstrike re-release. Many times we see concept drawings leak over baidu or taobao and then something similar makes it to market 6 to 8 months later 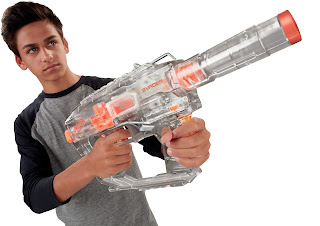 I really want to see this Reflective Targeting Kit in action. The part that intrigues me the most is the "Adjustable sight" that will "send a beam of light allowing players to perfect their accuracy skill." The release says this is designed to go on the Ghost Ops Evader. Nothing in there makes me think this won't work just the same on any unobstructed, forward-facing tac rail!

NERF ZOMBIE STRIKE SURVIVAL SYSTEM CHOPSTOCK Attachment
(Ages 8 years & up/Approx. Retail Price: $12.99/Available: Fall 2018)
Part of the new NERF ZOMBIE STRIKE SURVIVAL SYSTEM, the CHOPSTOCK attachment gives battlers a new way to strike back at the zombies! The CHOPSTOCK attachment doubles as a foam axe and stock attachment. Simply attach to any NERF blaster with compatible stock attachment point to use as a stock, or extend handle to use as an axe. Package includes foam axe stock. Available at most major toy retailers nationwide and on HasbroToyShop.com.

The Microshots are interesting. The more I look at them, the more I want them. I think they're a great for collecting. You can either get them all or just get the micro versions of your favorite blasters. 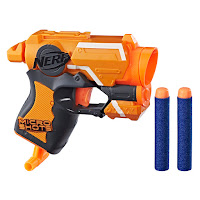 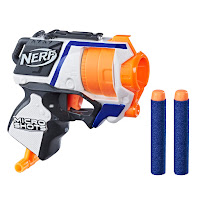 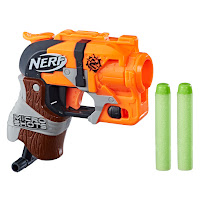 NERF MICROSHOTS SERIES Assortment
(Ages 8 years & up/Approx. Retail Price: $6.99/Available: Fall 2018)
Battle opponents like never before with the NERF MICROSHOTS SERIES 2 Assortment! MICROSHOTS blasters capture the iconic look of the original NERF blasters fans know and love, but in a micro, super-deformed fun size. Simply load, prime, and pull the trigger for big fun in a small package. This one-shot blaster is as fun to collect as it is to blast! Series 2 includes one micro-sized version of the NERF N-STRIKE ELITE ROUGH CUT 4X4 blaster, NERF N-STRIKE ELITE STRYFE blaster, and NERF ZOMBIE STRIKE CROSSFIRE bow. Each package includes one blaster and two ELITE darts. Each sold separately. Available at most major toy retailers nationwide and on HasbroToyShop.com.
Posted by Click Click BAMF at 8:04 AM