Well, warriors. Just after we released our review of a new option for nerf chronographs, two of our favorite companies came back at us with their own brand-name chrony merchandise. 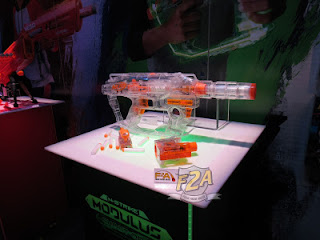 Nerf came out with a chronograph and ammo counter combined. You can see it in the foreground of this pic from Foam From Above. He was all over the showroom early on at the Toy Fair in New York this past weekend.

It looks like their product attaches as a barrel accessory with all the compatible streamline/elite firing blasters. Plus, there is a tac rail on the underside. The release is pasted at the bottom of this post. Check out Foam From Above's first-hand write-ups for more on this new release. I am pretty excited about the price-point.


Buzz Bee also had an "X"-tremely affordable option pop up in the showroom too. Get the low-down again from F2A's write-up on the Velocity X. I'm just gonna say though, $14.99 for a versatile chrony that can attach, mount on a tripod or hand-held. It's also big enough to measure bigger things like Rival and MEGA ammo from their competitors.

It looks like the one major down-side to the Nerf chronograph is that it only works with darts due to the size. The High Impact rounds, the MEGAs and other ammunition will still need the help of another purchase like from Acetech, Camden or Shooting Chrony. Granted, I fully expect Nerf to re-release this accessory for all sub-brands that need it over the next couple of seasons, but I don't know if you want to spend that 15 bucks three different times. On the flip side, it sure would be nice to have an attached chronograph if you are running something new or trying out a mod that needs constant monitoring.

What do you think?