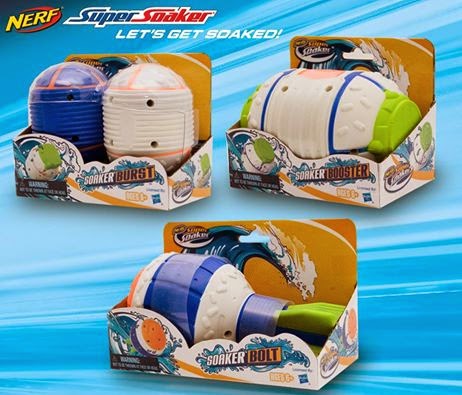 Anyone up for a water fight, warriors? The other day, Perpetual Play posted an ad for what can be best described as water grenades. We've seen these Super Soaker products (or similar versions) pop up before at Toys R Us and places, but after I saw them on clearance last year, I was afraid they wouldn't return.I'm glad I was wrong!

The Perpetual Play Group has been cranking out products under a NERF license for a while now. They had some great releases under Super Soaker in 2012 with the Battle Shield, Assault Bunker and the Rocket Dart. They seemed to take the 2013 season off from Super Soaker, but at least the grenade-like throwable got a color update and are back for this year.

Speaking of water fights, a box just arrived from our friends at NERF. It includes a lot of the new NERF Super Soaker releases, so expect reviews on those to come up!! ~Chris
Posted by Click Click BAMF at 7:39 PM