"Light It Up" Series Is Official

Hello Warriors!! We hope you've had an amazing holiday season and are ready to get back in the swings of things with us! We've got a lot on our plates this days, though we can't help but keep this digital rag going. Thanks for your support on Youtube, twitter and facebook! And now on to exciting news: 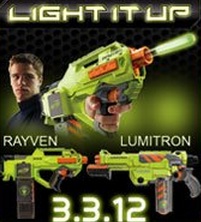 Yesterday, NERF made the official announcement for their March 3rd release on their facebook page. They confirmed that the Lumitron will join the Rayven as a member of the "Light It Up" Series of blasters. Some blogs and users have been talking about this release since December. Notice anything familiar about the new Lumitron? 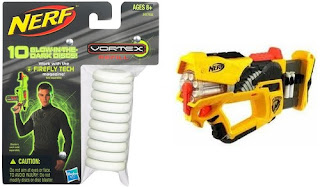 When we heard of a new blaster called the Lumitron, I was stoked for about a second. If you follow Urban Taggers at all, you'll already know that the Lumitron is a Vortex Praxis re-paint. This was disappointing for me as Praxis was the only Vortex blaster I took real issue with. I doubt that the jam issues have been fixed with the re-release.  Yet as details continued to unfold, we learned that the new four-blaster Light It Up release will likely have "firefly tech" included in each clip. We know that the Rayven has that tech included, which was a cool carry-over from the original N-Strike Firefly. (Props to them for respecting their heritage.) Now websites like walmart.com have the Vortex disc refills with "Firefly Tech" included. Apparently the renamed Praxis (Lumitron) will get the same tech in a Vortex clip! Dang, NERF; you stoked me again when I wasn't looking!

With the cross-branding, perhaps one of the other two releases for Light It Up will be from the NDTL line? Anyone thinking that they'll honor the parent of this line with a N-Strike Firefly re-paint? ~Chris 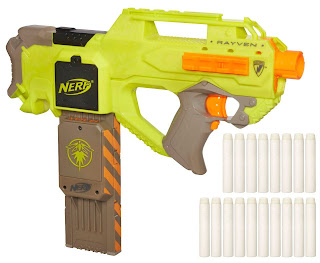