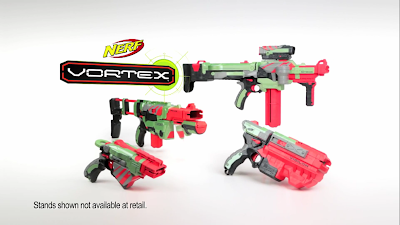 http://www.youtube.com/watch?v=4nFk4qW2o1k
In their third Vortex video release, NERF has finally confirmed and officially released what the blasters are going to be called as part of the Vortex line. Getting an even better look at the blasters, I am personally twice as excited to try each of them out! The size of the blasters in the shot I picked above is obviously not proportional if you compare to the other two videos they've released.
We all were comparing the stock that comes with the Praxis to the Recon stock, but the new version looks loads more comfortable and sturdy. I, for one, am crossing my fingers that they release it in the N-Strike color scheme as well (not just the Gear Up version).
BTW . . . Vigilon? Weird name. Maybe it'll grow on me, but I think it's kind of weak.
~Chris Jacobs
Posted by Click Click BAMF at 10:04 AM