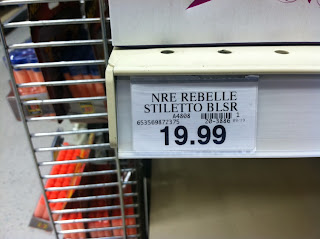 The real reason I am glad they avoided the name is because it is so much better suited to a dagger. In fact, the stiletto is the name of an Italian dagger or knife. This was the case long before that shoe came out -as far back as the 1400s. Now the name describes a number of knives with very fine points and narrow blades. I doubt we'll ever see a stiletto-type knife from NERF, but one can have wishful thinking!

UPDATE: Also, an informal poll in my newsroom shows that 9 out of 10 women like the name Sweet Revenge over the name Stiletto anyway. 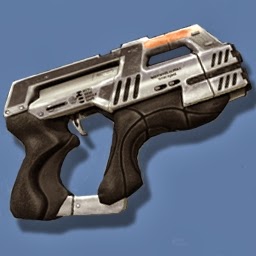 I'm not sure what possessed the authors in Mass Effect to name one of the pistols Stiletto either. Perhaps, in that case it was more about the ammunition used? If it's armor-piercing, I guess that would make sense. Maybe Hasbro avoided the name for licensing reasons. I'll ask.

A design from a UK company called Stiletto Systems carries the same name for a real firearm. They advertise it as effective against threats that are equipped with advanced bullet proof vests at distance of 50 m and light armored targets (6 mm. / 420 Brinell) at distance of 30 m.

NERF does seem to avoid names with directly deadly connotations. The history behind this name may have been enough to steer them in another direction before putting these on the shelves.


UPDATE: Nerf says that the name has always been Sweet Revenge, so this may have been some sort or weird error by Toys R Us and the other on-line company I saw this listing on.
Posted by Click Click BAMF at 10:48 AM