So, several of the new Super Soaker blasters and accessories have shown up in one of the local Walmarts near Click Click BAMF's Mountain Division in Colorado Springs. Not that any of these are a surprise. THE SHOTWAVE: This may be one of the weirdest new blasters I've seen. The water clip just sticks so far out that it seems things would be awkward. Though, the input placement makes this a good candidate for the Hydro Pack vest. 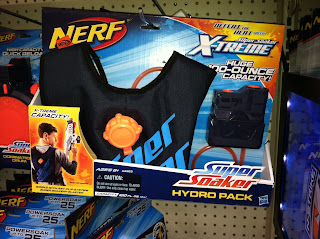 HYDRO PACK:  100 ounces of water to douse your enemies with. It works with any of the clip system soakers. It looks good, though I doubt it will fit larger adult frames.

Check out the new clips. Between the banana clips and the individually sold drums, you may be better off reenacting any big movie scenes with Super Soakers over other NERF blasters. At 20 ounces a pop, the banana clip can hold it's own while looking good. I still really like the placement of the caps on the Super Soaker clips, they are really convenient for a quick fill-up. And yes, the banana clips have belt clips on them, which is good. The drums are bigger, of course, holding 37 ounces a piece. These aren't too pricey either, coming in a 8 or 10 dollars a piece. 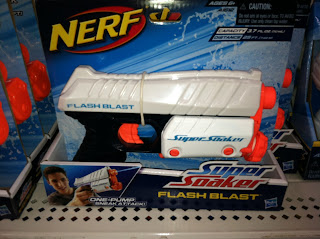 FLASH BLAST: NERF is fronting this thing as a sneak attack blaster. It holds 3.7 Ounces. This is so it can be compact and concealable. It only costs $8.99 so it could be a great addition to your arsenal. Not a bad addition, though I'd personally stick with the Electrostorm for one-handed access. 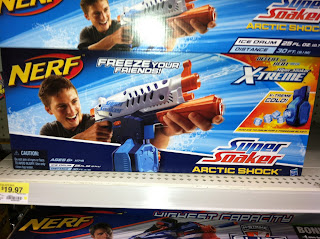 ARCTIC SHOCK: Did you ever add ice cubes to your water gun to give your opponents a surprise? Well the clip on this blaster is designed to help you fit those frozen cubes in more easily. The blaster itself is nothing special, so we can only hope that NERF will soon sell these clips separately to satisfy the masses!

Lastly the Switch Shot. Sadly, they stole the name from an already existing blaster. Honestly it doesn't steal from the coolness of this one though. The Switch Shot allows you to select your spray pattern from fours choice. It comes with a 20 ounce banana clip. I like the blue design on the box better than the orange -just sayin'. Don't forget the awesome stock that comes with it. I still think it's the most beast one they've come out with. 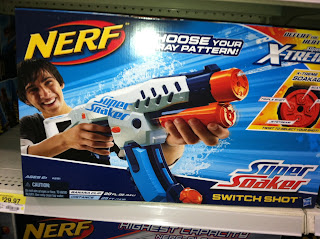 We're working on some testing variables for the Super Soaker line. Perhaps you'll see some of our indepth reviews on NERF Super Soaker blasters in the near future.