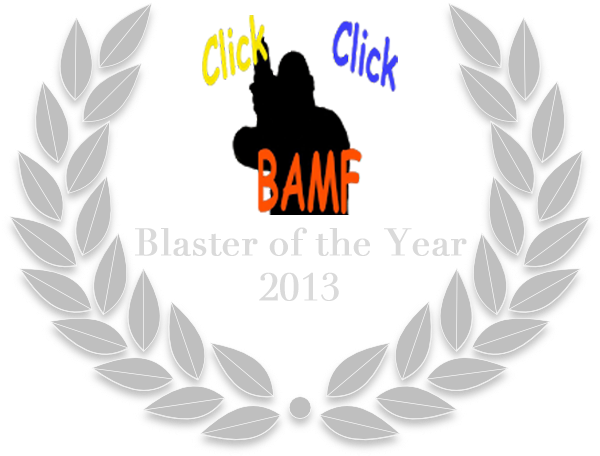 So yes, warriors. It's getting into the second week in January, but we figured we'd better close out 2013 properly. Props goes to Melvern Soelaiman for asking for thoughts on the NERF blaster of the year on the NERF facebook page just ahead of the New Year. Several of our fellow bloggers in the NIC have been thinking the same thing. Coop and I realized we would be remiss as we look ahead if we didn't award blaster/foam weapon of the year as well.  Several toys from several makers had us talking.

For a yearly award, you've got to figure that this blaster would be something that could make it through our five categories relatively unscathed (Speed, Range, Accuracy, Appearance and Value). It should probably be a blaster that brought something innovative to the table. Also, the toy would need to have received good user reaction in general.

We've narrowed the candidates down to 5: The NERF N-Strike Elite Rapidstrike, The NERF Zombie Strike Hammershot, The Zing Zombie Slayerz Z-Tek Bow, The Buzz Bee Air Warriors Extreme Range Master and The Tek Recon Havok. Several others were proposed, but you have to draw the line somewhere!

(See which one wins after the jump)

The NERF N-Strike Elite Rapidstrike has put smiles on many faces in Nerfdom. The premiere assault rifle of foam blasters came out strong as a new flagship for the N-Strike Elite line in 2013. The output, coming in at less than six seconds per 18-dart mag, is enough in itself to demand some attention from the enemy. Cosmetically, this is a pleaser. Kids and adults both love the assault rifle feel that this blaster provides. It also has prolific cosmetic mod potential as demonstrated in pics and blogs all across the world. The problem this beast comes up against is in accuracy. You can spam a bunch of darts at a foe, but that could all be in vain if they don't hit home. Fun blaster with a tacticool feel? Yes. Blaster of the Year? Not quite. 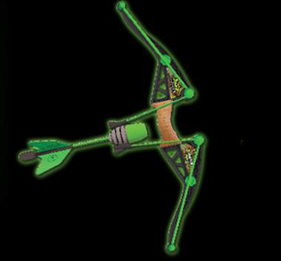 The Zing! Zombie Slayerz Z-Tek Bow- Their zombie-specific release ahead of Halloween 2013 was right on time and the bows still out-perform most anything on the market for distance while remaining relatively safe. Yet, it falls just shy of Blaster of the Year because you don't necessarily want to use these in a NERF war due to a mix of ages and comfort levels. You can't always pull out one of these in the office or on your friends at home like you would a NERF or equivalent blaster. Some people are cool with it (like me), but many people don't want a hit to hurt quite that much. Maybe we'll do a separate heavy hitters category next year.

The Range Master was the first release in what would become the Buzz Bee Air Warriors Extreme line. Originally released in 2012, it made a come-back this year under that Extreme moniker. It has some great accuracy and finally gets a solid delivery for that ammo. Speaking of ammo, that got an update with this blaster as well. The Extreme ammo has a denser feel to it which contributes to that solid hit. Some other Extreme blasters also showed up this year to try to combat the NERF N-Strike Elite line. Yet, Range Master was the first and got some great remarks and input during our review. It's the second longest blaster in current production -just behind the Centurion. With its long priming time and the original release date from the year previous, it still couldn't quite make the cut for Blaster of the Year. I was looking at the Buzz Bee Side Winder for this blog as well, but it didn't quite make the cut. More on that blaster later. 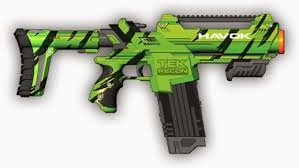 The Tek Recon Havok is really in here just because Tek Recon needs a mention. Their kickstarter campaign did generate a lot of buzz and the products themselves have shown a lot of promise. In fact with the ability to add attachments, this line will see a lot of "tacticool" improvements in 2014. The Havok also has a more stable app cradle than does the Hammerhead. This system is just not what was advertised in their campaign video. The ammo is too small for a good recovery rate and it's comparatively too expensive to replace at the rate you should plan on losing it. In my opinion, it's not really a candidate for blaster of the year. Though, I think this Tech4Kids line will only go up from here. 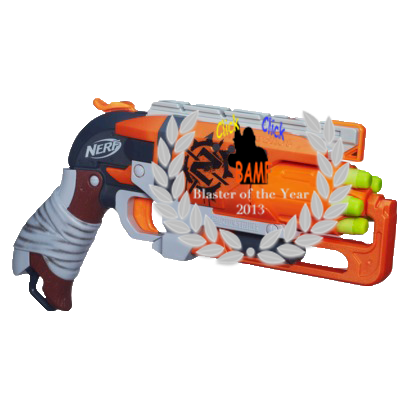 The NERF Zombie Strike Hammershot (or the Rebelle Sweet Revenge) introduced mechanical, one-handed blasting to the masses of NERF warriors. (I have to thank Andu Mijomee - Andu Nerf for pointing out on facebook that there was the Snapfire that came out before Hammershot. Coop and I discussed that one too, but we didn't feel it had the wide-spread success that the Hammershot did. Thanks Andu!) Also yes, there were already electronic blasters that brought the ability of one-handed blasting to the warriors, but nothing quite like this. Now you have a relatively quiet sidearm that can be ready to fire multiple shots, one-handed, at a moment's notice. The ability to load as you go is always a plus if you choose to wield this (or more than one) as a primary blaster. This is even a hit for those in the community that just want to do Steampunk or other cosmetic mods. It's affordable for warriors in almost any spending category. The Zombie Strike Hammershot is a Target exclusive and that almost hurt in our judging. However, Target is one of the retailers that stays generally fair on blaster prices, and they give you the ability to order online. Meet the Hammershot, Click Click BAMF's Blaster of the Year.
Posted by Click Click BAMF at 12:15 PM