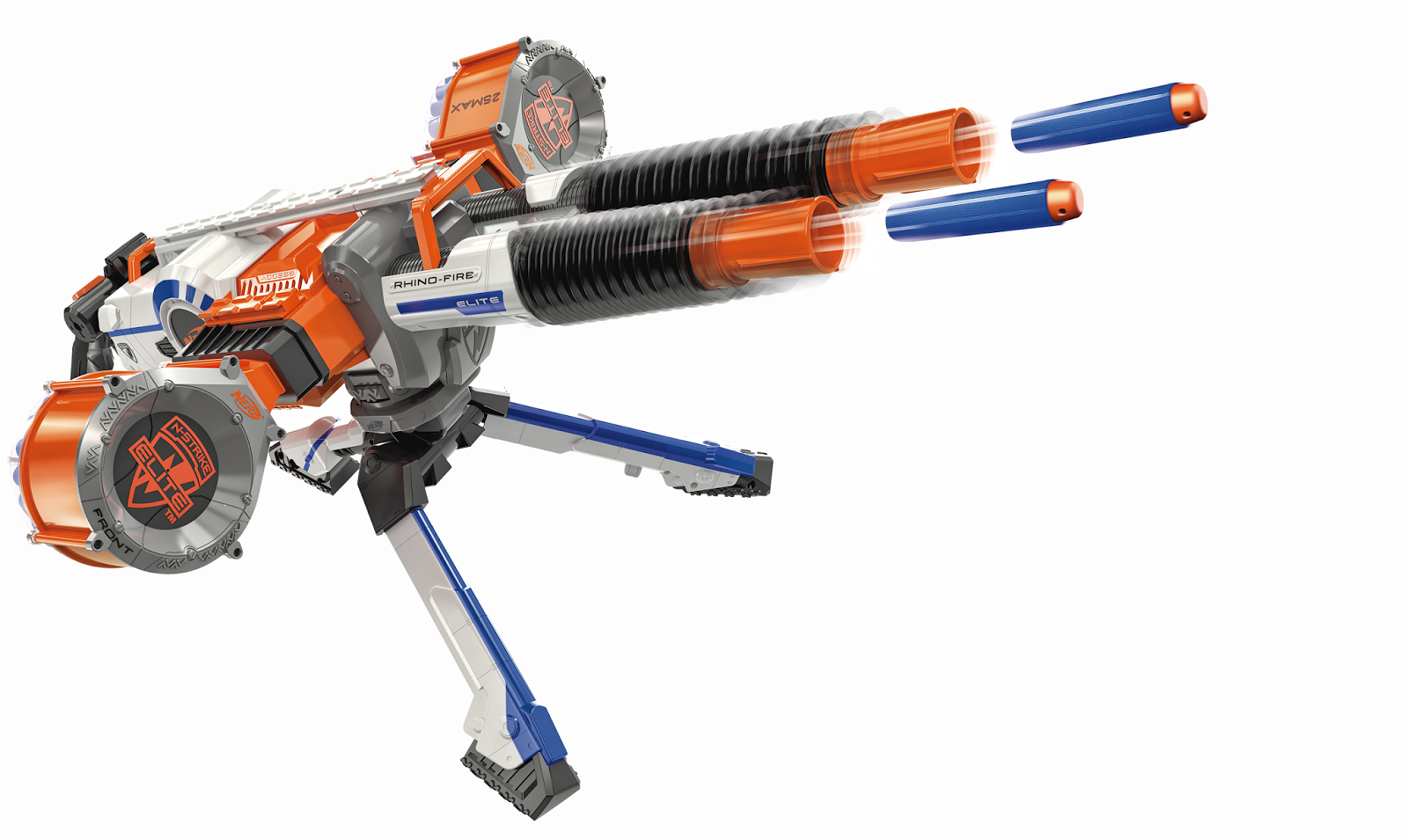 Check it out, Warriors! Looks like the big bad blaster for the season may have already leaked out! Check out what showed up on the Spanish Amazon site. The box art calls it the Rhino Fire while the site calls it the Rhino Strike. 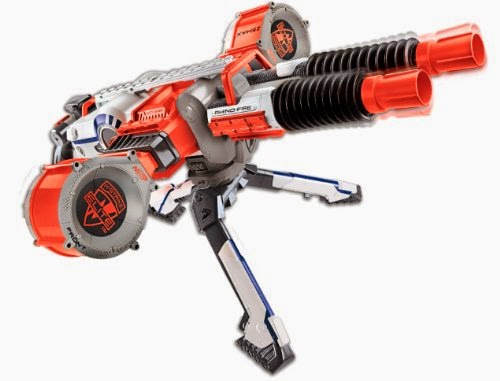 Now, it doesn't show in stock yet, but that's only a matter of time. At first glance, this looks like the new answer to the Vulcan/Havok of old. With the large bipod and high dual output, this looks to be the new "turret" weapon for the market.

Just from looking at the artwork, you can see that this will be drum-fed (likely flywheel-fired). It looks like the back has a similar trigger system to the Vulcan. There looks to be a tactical rail -at least on the right front and the top.

The products that we've been awaiting from the Rebelle Secrets and Spies line have hit the shelves! No sign of the Rapid Red, but everything else seems to be there -at least at the Toys R Us in Colorado Springs. 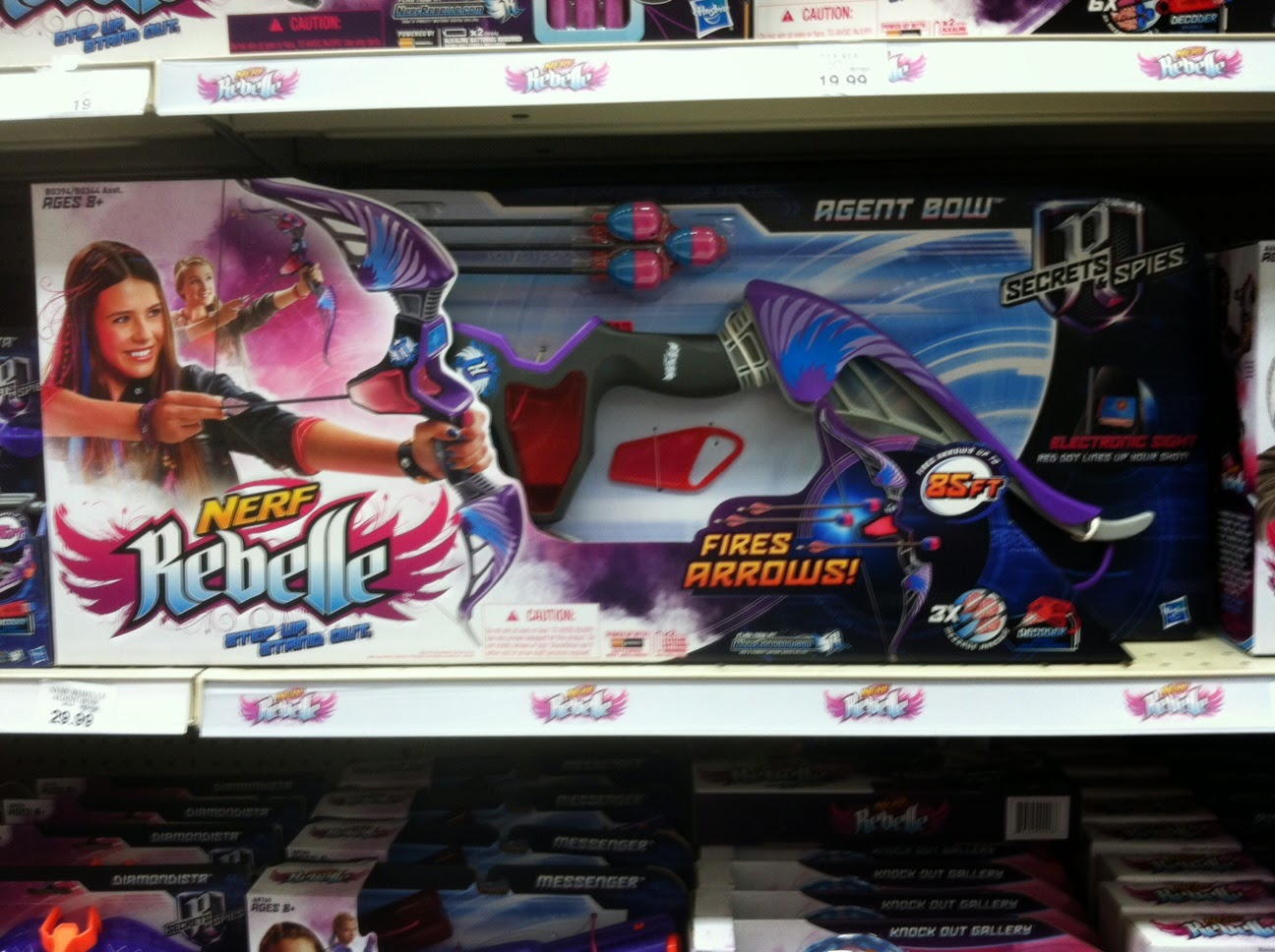 Of the most interest may be the Agent Bow. It's NERF's first real foray into the world of actual bow-fired arrows. Sure, they've had things with the word "bow" in the name. However, this one seems to be the first direct competition to the Zing bows from NERF.

It claims 85 feet for the Range. That's shy of the 100 foot MEGA distances. I wonder how they will fair with this completely new-to-Nerf projectile! BTW, you'll drop 30-bucks plus tax on it.

Strangely, it is not on ToysRUs.com or the Rebelle website. Well . . . none of the new Secrets and Spies blasters have popped up on the official website. 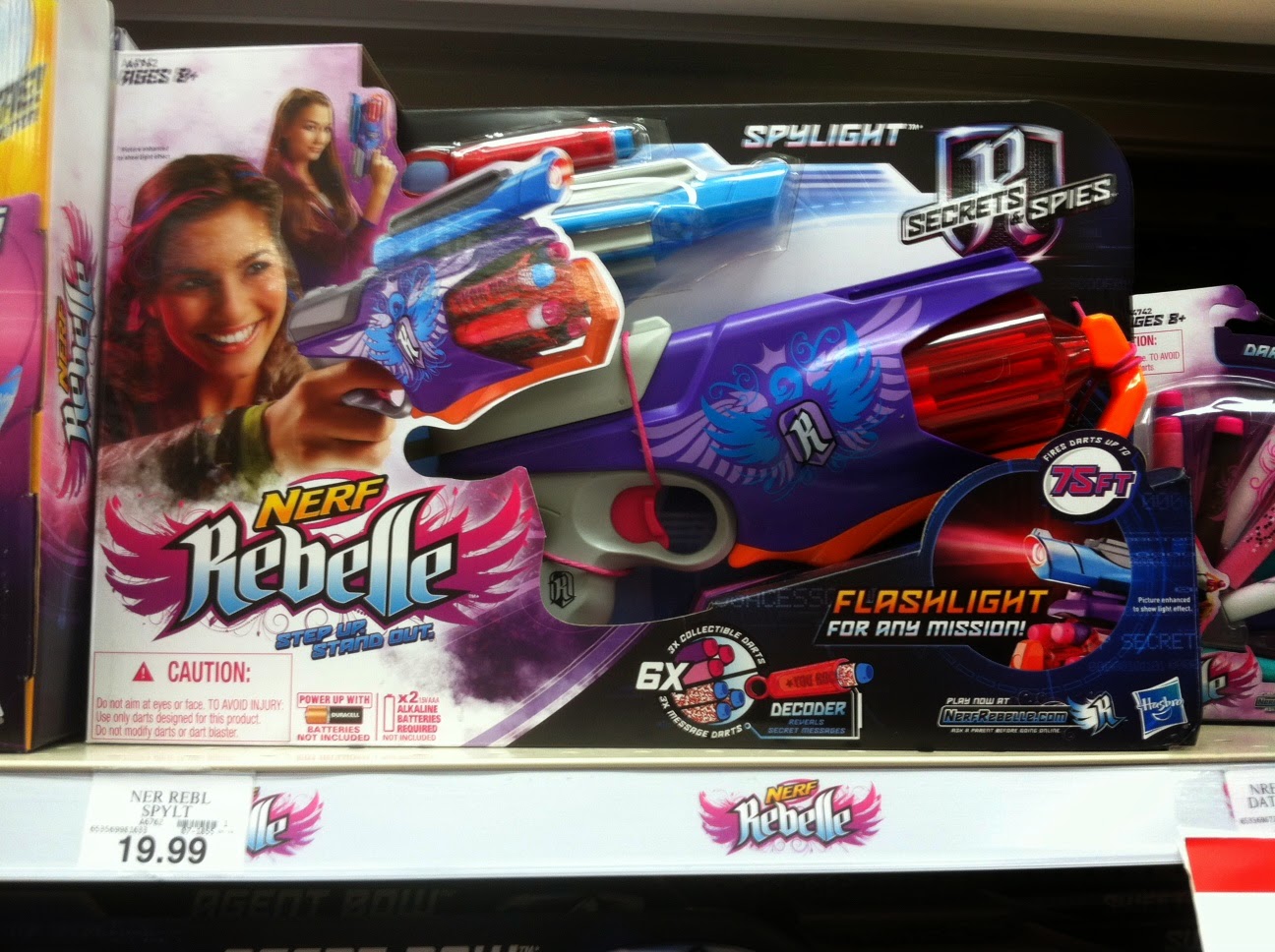 The Spylight does look like a Strongarm with a flashlight attachment as expected. I left this one on the shelf, but I can see the appeal for some. I think I may stick with the Firestike if I want a light and the Hammershot if I want a revolver.

It lists at $19.99 - so you're spending another 7 bucks over the Strongarm for the flashlight and the Messenger darts. 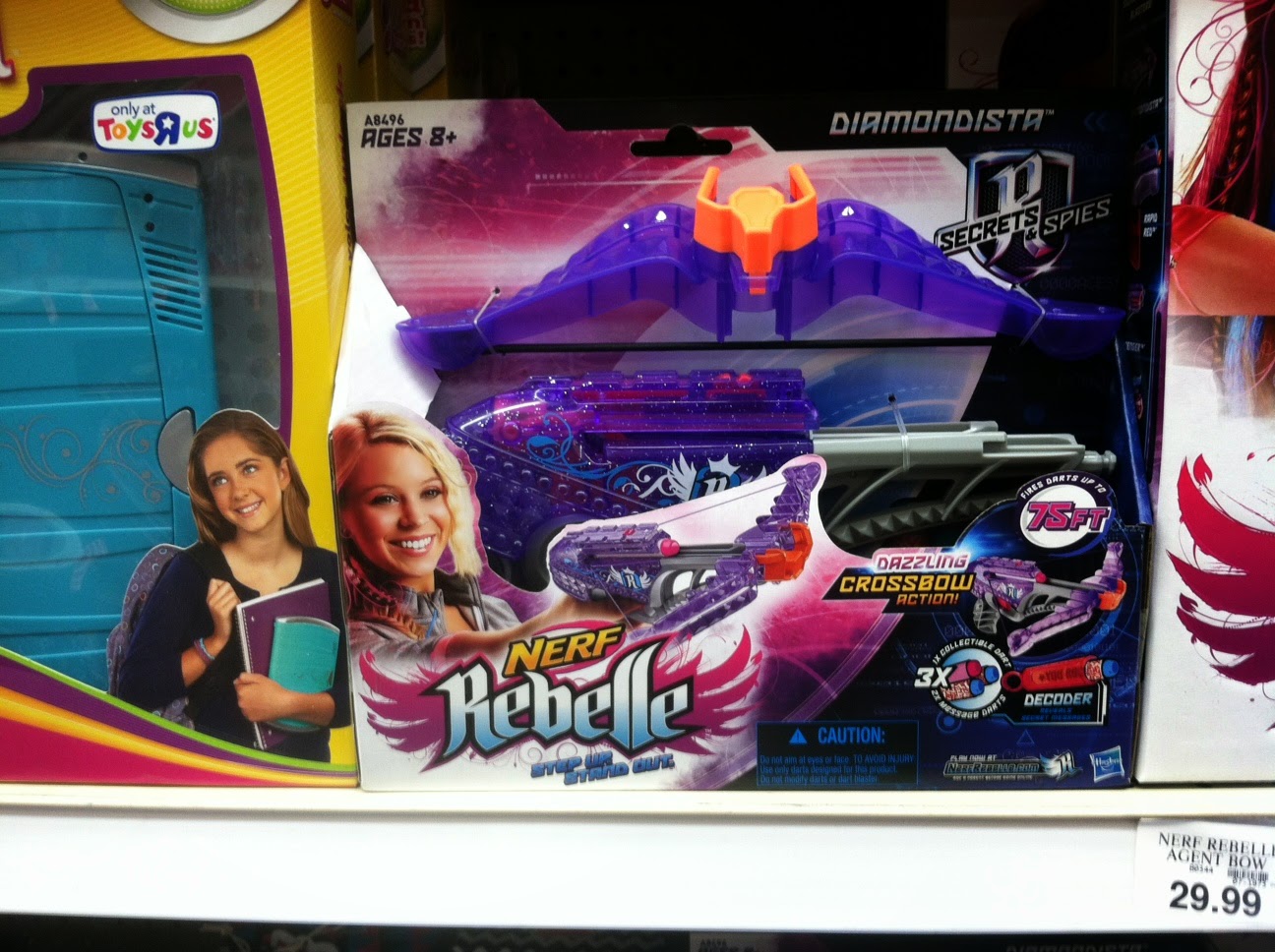 I'm not quite sure what to make of the Diamondista. It's modeled after a crossbow like blasters across the NERF branding.

At $9.99, this is the most basic blaster in price and size in the Secrets and Spies releases. The original description NERF sent describes this as a blaster for missions that require elegance.

We did grab one of these too, so some more info will be on the way. 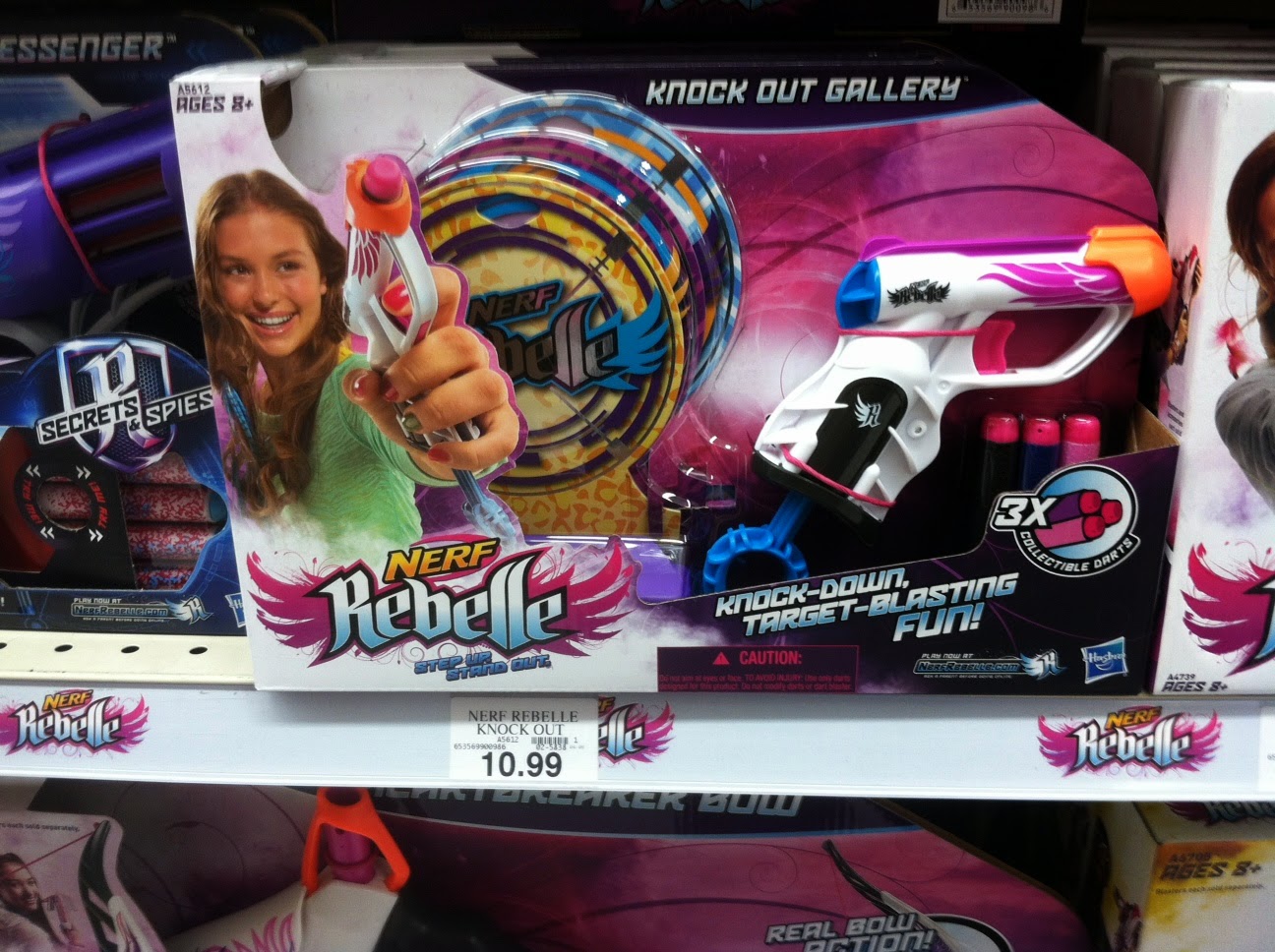 I don't know what happened to my picture of the Messenger blaster, but you can see it to the left in this shot of the Knock Out Gallery. All of the Secrets and Spies blasters come with the tech to "decode" messages from this one. It's S14.99 for this one. Obviously, you seem to be paying for the new "secret messaging" tech here.

As for the Knock Out Gallery, it's a basic target-shooting blaster. Meet the Jolt, Rebelle version. When I was in store, they had a deal running where you could buy the Knock Out Gallery and get a 12-pack refill of Rebelle darts for free.  Turns out they are running a promotion online where you can get the free 12-pack with ANY Rebelle blaster that costs $9.99 or more. Note that its the regular dart refill pack and not the Secrets and Spies version. 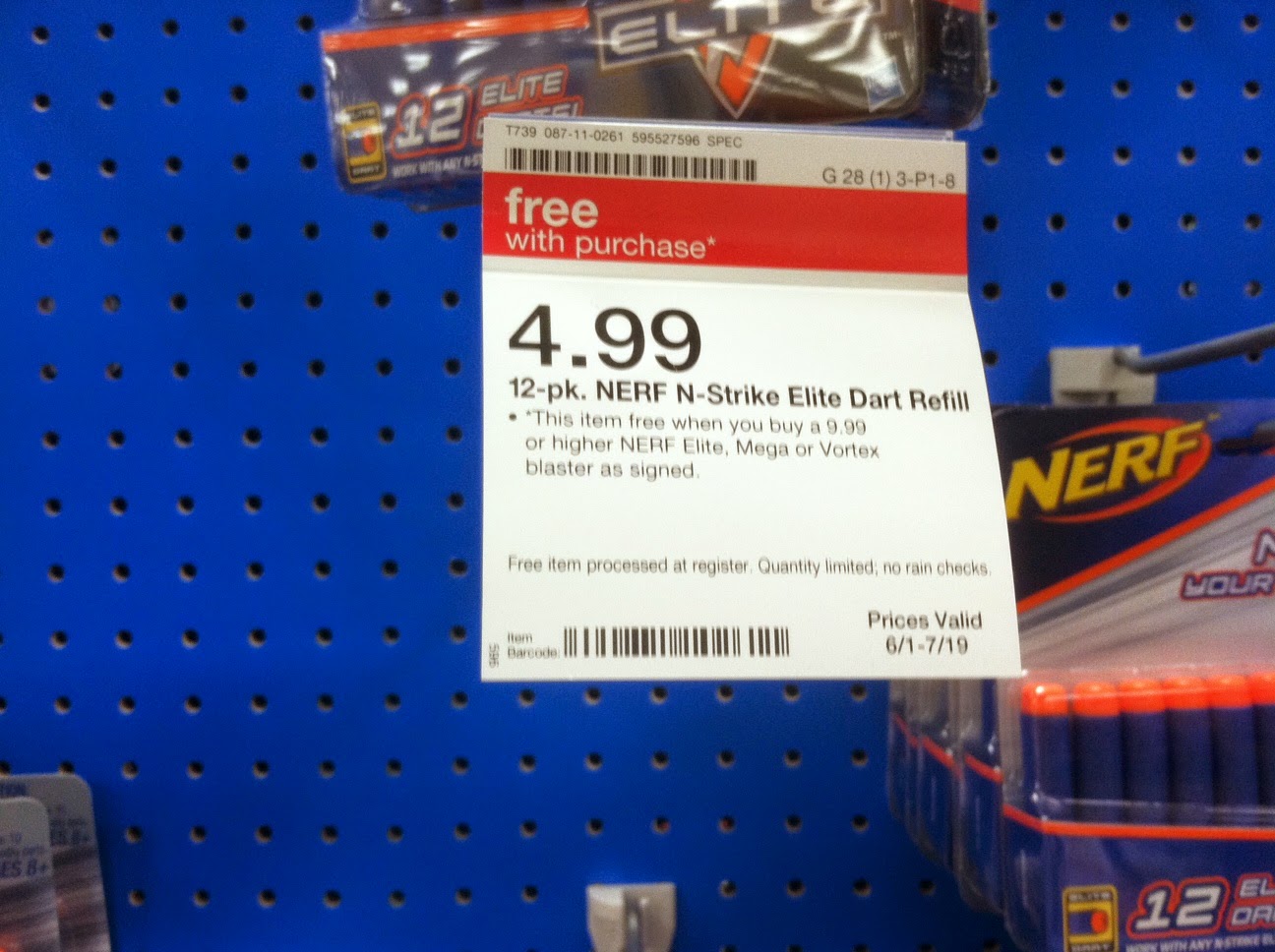 Target was running a similar deal today in Colorado Springs where you could get a free 12-pack of elite darts with any qualifying N-Strike, MEGA or Vortex purchase.