What's this -A sleeper surprise from our friends at Hasbro? Smooth move.

Every once in a while NERF does something that just makes you go, "Huh?" That time has come once again. I don't really know why they released their new mini-blaster, the Jolt. I first heard about it only a day or two ago. My first impression was Why would NERF make an energy drink? But seriously, I know it's been generating a lot of buzz around the world the last couple of days and it had me very curious too. 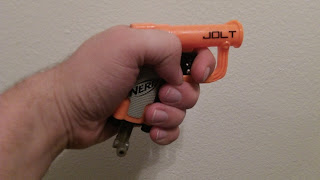 To be honest, I find the little pistol to be rather uncomfortable to hold. It's certainly not designed for an adult hand. The grooves in the handle make things worse and I think it would have been better with a smoother design. There's a lot of crowding trying to hold it as well. I thought the Secret Strike was well done with the design of the handle. They couldn't do the same thing with the Jolt because of the placement of the plunger.

With a casual test of the range I'd guess a straight-fired average of around 30 feet to maybe 35 feet. It's dark out and I only have 25 feet down the length of my apartment :) I definitely don't think it averages at the 40 or 45 feet that a couple of others suggest. 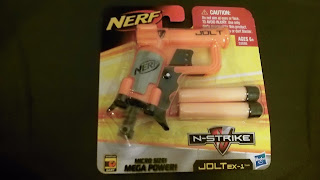 For the record, I still kind of like the blaster. And hey, it was only 4.99 at K-Mart. It didn't say K-Mart exclusive or anything, but I haven't found it anywhere else . . . yet. It came with two whistler darts. No tac rails. But it can fit in a pocket. They had room for a full sight on it. One pull to prime it instead of several pumps like the Secret Strike. Though it doesn't have a key ring either!

There will be a more comprehensive review on Youtube soon. But we do have 3 more Vortex blasters to get through!