A Little Too Real 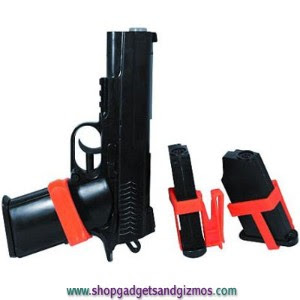 Take a look at this picture to the left. The "Splash Master Reloadable Magazine Water Pistol" has 3 magazines and several belt clips to help make it look and feel like the "real thing". This image represents the joy of many a kid and the terror of many adults. Toy guns have been around about as long as firearms themselves, so accidental shootings thanks to toy guns have been a real and scary thing for several years.

For as long as I can remember, I've been enamored with realistic looking water pistols. Perhaps it came from the desire to be uniquely well-equipped against the bad guys I was blasting in my head. Maybe instead it was because I was curious about the workings of real firearms. Or possible still, I was already a stickler for accurate role-playing. In any case I've loved the getting my hands on good props since I was a young boy.

Once when I was a pre-teen, I was on a family trip and made what I considered to be a great find. At the Family Dollar we stopped at, there were some great looking water pistols that mimicked an M1911 and a German Luger. I grabbed those things about as fast as I could. My parents weren't the happiest, but lt it pass. Of course a short time later, I got the idea to paint them black for use in student films and such.

While it seemed like a good idea to me, it was exactly what my parents and many politicians were afraid of. Check out this New York Times article from 1998. About this time and within the next few years after, it became much harder to find realistic looking toy guns in my local area. Even convincing Airsoft (and equivalent brands) guns became more rare. While this was to my lament in teen years, I still understood why. Kids aren't known or even expected to be the most responsible people on the planet. They can do some fairly dumb things, not the least of which is to wave what looks like a gun at the wrong people. 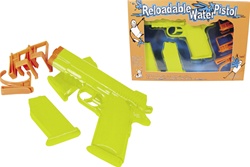 I'm all for having fun and finding the next cool product to play with, but let's hope toy makers continue to use some common sense. This is the currently available version of that water pistol we were looking at. This color isn't likely to get you shot. I picked it up at the Walgreens down the street from Click Click BAMF HQ. Yeah, I'll likely paint it for use in one of my independent films, but that's on me. You won't be seeing one of my little nephews running around with it.